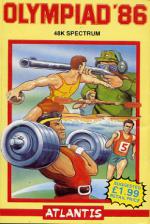 Seeking stimulation from simulation? I'm afraid you night be struggling with this one! A little late for Los Angeles and somewhat soon for Seoul, Atlantis reckoned on hitting the market whilst there was no opposition. It reckoned without Mastertronic's Video Olympics, though that's not the hottest thing to hit your joystick, either.

Olympiad '86 is a Sports simulation of a cross section of Olympic events - canoeing, 2OO metres sprint, weight lifting, discus and the now compulsory skeet shooting. Why's everyone got it in for skeets, that's what I want to know? When was the last time a skeet got up your nose? Unfortunately, though, Olympiad is a simulation of other simulations - start at Daley's and work down.

The game gives you your moneys worth in terms of numbers of screens, but as to their quality and just how much is used on game play - well, I've seen more wit, action and invention on the TV test card. It's not joystick compatible and only has single player facility. You have three lives and you lose one each time you fail to reach a qualifying standard. Lose all three before completing the canoeing and you have no chance of being in the medals. There's a (marginal) points system, though, which allows competition with your opponents even if you don't reach the gong show.

Arsenal fans alone might spy some excitement in this farce. I certainly didn't.

Arsenal fans alone might spy some excitement in this farce. I certainly didn't.