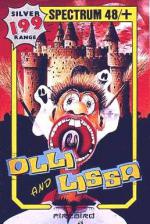 When you see a cheapie 'of this calibre you start to wonder if you should've been quite so critical of them in the past...

It's true that I might have dug down deep into my disgusting dictionary of diatribes and found something wrong with this program if it was billed as state-of-the-art and came priced at £9.99. But I'd have had to look hard and besides it's £8.00 cheaper!

Set in Shilmore Castle in the Shcottish Highlands [Someone's been at the Shcotch! - Ed] the castle ghost Sir Humphrey gets the hump when he finds that a rich Yank is shipping his new property back to the States brick by brick. Sir Humphrey gets it into his head that if he makes a potion from eight ingredients lying around the castle he can become invisible, the humans will be frightened of him and they'll naff off back to Skyscraperville. I only said the game was good - I didn't say the story made sense!

And there you have the beginnings of an average platform game, with ghosts and ghoulies skilfully positioned to make each jump very difficult. You play Olli, a cross between one of Snow White's seven dwarves and a Smurf.

The graphics are the special event in this game. A look at the start-up screen should convince you...

Movement is smooth, and there's a slight dash of humour. If you don't move Olli around for a few seconds, he stands there tapping his oversized footwear, scratching his head while a cartoon bubble appears with a quivering question mark challenging you to make your mind up quickly and move on.

And there's a cute bit when your energy runs out and you lose your life - the screen goes black and Olli appears, only to be beaten over the head with an old-fashioned broom by Sir Humphrey.

The game is exceptional value for money and a worthy challenge to boot.

The game is exceptional value for money and a worthy challenge to boot.