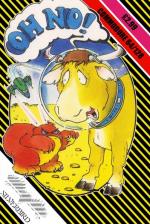 It's the year 1,000,000 AD and the Universe is a very weird place. Brain engineering has reached new heights and the player of Oh No! is a sad victim of the latest technique in brain specialisation.

Aboard the inertially-controlled trusty steed, Badjak, the player's sole purpose is to raise and breed Oxes - fascinating glowing orbs of intense religious significance - on eight multi-directionally scrolling worlds. The screen display shows one quarter of the patrol area, but the whole world is revealed on radar.

Armed with super lasers and a toenail boomerang gun the player protects the prized herd from alien rustlers; occasionally an Oxe parent - a metaphysical energy field - appears on the landscape: destroying this brief physical apparition provides enough energy for a brand new baby Oxe to be born. When nine alien waves are cleared, the next world is accessed.

Instant death is the penalty for losing all five Oxes: your specially engineered brain explodes with excitement.

Once again, Sensible Software prove that, as far as blasting goes, they are master craftsmen. Oh No cannot boast the sophistication of their masterpiece, Wizball, but its simplicity is its strength. The pace of the action is extremely fast because the player's ship is in constant motion. Play therefore reaches such heights of freneticism as only previously witnessed in Minter games, and the player is rushed headlong into fevered addiction.

The first few levels are easily beaten, but just as you're getting confident, the game abandons its deceit and throws crowds of marauding aliens at you.

If you want something to pick up and play to fill an empty moment, there's not much going that beats this.

Couple the same sense of humour that appeared in the ageing Galaxibirds with frenetic, psychedeliic shoot-'em-up action, and you have Oh No!. The unusual inertial control method only enhances the action as your steed hurtles about the screen.

Combined with the bright, colourful graphics and decent sound, it produces a very enjoyable game. The impressive presentation includes numerous humorous touches (spelling mistakes, graphic jokes) and a neat high-score table, although a two-player option would improve it.

It's not the greatest budget blast around, but if you're looking to unleash some energy, this fits the bill.

Graphics 71% Colourful and polished sprites set on a range of similar backdrops.

Lastability 72% Plenty of worlds to protect but the repetitive nature of the gameplay could prove unattractive.

An enjoyable, if ultimately limited, blast. Fast, colourful action from the start.