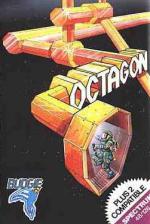 Pieces of eight! Pieces of eight! Yup, the key number of this particular beast on Alligata's Rino label is more than seven, less than nine and adds up to quite a neat mazey platform with a large element of strategy.

Up to four people (or octons) can play Octagon at once, questing to find the eight pieces of the octagon that have to be retrieved from the centre of the complex. The complex is built rather like a honeycomb, made up of sixty cells, each linked by several tunnels. Every cell is inhabited by various nasties that can be stunned but not killed, and constant contact with them wears down your own psychic power until all your get up and go has got up and gone, leaving you an ex-octon.

Each cell has four tokens - these must be rounded up individually, whilst avoiding the mashes, and returned to your standon. Without these four tokens you won't get the key that allows you to move on to the next cell. Occasionally you have the option of getting more tokens that'll save on the running about when you get to the next cell... but there again you might not even get there if you get golloped up in your greed for more tokens. And think carefully whether the direct route is the one you want to take to the heart of the complex. Since each cell has its own style of escape, you might find that a little wander round the honeycomb gives you a route more suited to your gameplay.

With all the fetching and carrying involved - there are sixty cells with four levels, and eight successful return journeys needed to complete just one level - you might begin to feel like a bee going round in the same old patterns all the time. However, the puzzles are sufficiently hard that each cell counts almost as a mini game in itself. If you're a marathon runner rather than an explosive sprinter and can put up with galling graphics, then Octagon is worth at least the few pieces of eight you'll have to shell out for it.

If you're a marathon runner rather than an explosive sprinter and can put up with galling graphics, then Octagon is worth at least the few pieces of eight you'll have to shell out for it.