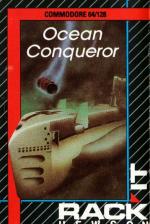 If current enemy troop movements are allowed to continue, winning the war is gonna be a piece of cake - for them! Something has to be done and quick.

Enemy shipping lines are carrying the troops' essential supplies. The only way to stop them is to send an infiltration craft that could pass through their scanners and destroy the freighters. Cue the submarine under your command - Nautilus.

To get to the freighters, you must also dispose of the escorting destroyers, which are heavily armed and can outrun you.

The future of the allies is in your hands. Can you save them? Well, maybe you could if you were playing the game, but if you're not, then you won't. OK?

Rack-It have been building a rather good reputation for themselves over the past few months with playable budget games and high-profile re-releases. What a pity that they've taken such a backward step with Ocean Conqueror!

There is a lot to it - compass headings to read, weapons to be fired and docks to be negotiated - but the whole thing looks really cobbled together. The graphics are extremely poor, being more confusing than helpful, and the sound is abysmal. If I hear that title tune once more I'll probably throw a fit!

If you spend three quid on this you must be either desperate or crackers.

Bleuch! This has really thrown cold water on my ambitions to become a famous submarine captain. If the world really looks like this from a subaquatic viewpoint, I think I'd rather spend the rest of my life at home with a dead fish (sorry Ken).

If you suffer from migraines, avoid these graphics like you would a double helping of Maths homework on a Friday night - they won't do you any good.

So, is there a game under the badly designed surface?

Erm... ye-es, but it's confusing and about as interesting as a wet weekend with Gordo - nothing to up periscope about.

Sound 12%
Crunches for explosions and a dire title tune.

Hookability 13%
When the game screen appears, the phrase "Oh no!" springs to mind.

Overall 21%
Not really up to Rack-It's usual standards.

Play this you must be either desperate or crackers.