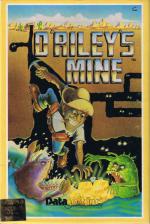 This is one of those scrolling games which has you playing the part of O'Riley, the fearless miner. Unfortunately, there's a leak in the shaft and water's gushing everywhere. As fast as you can dig a tunnel, it fills up with water.

But, as every good physicist knows, water will travel to the highest level filling the lower ones as it goes. So if you dig a side-to-side tunnel branching off from the main vertical shaft, then the oncoming water will fill your new tunnel before rising up the main shaft and blocking your only hope of escape.

The secret I found is therefore to dig horizontally along the whole length of the bottom of the pit. This will allow you time to get back to the top without the shaft filling with water.

The object of the game is to dig in the mine and collect the buried treasures. When you've found all of them, you move to the next level, of which there are nine. I found the game rather easy at first and, once I'd worked out the tactics, there was little difficulty in getting to level four.

As well as collecting the buried oil, gold, diamonds, coal and uranium, you are also pursued by some river monsters. What they're doing in a mineshaft is anybody's business, but they must be avoided on pain of being frazzled. Then there's the water, in which you will drown instantly if it touches you.

My main criticism is that the mine isn't very wide - in fact, the true width is only about two screens. This makes the game rather monotonous, and I don't think that I'd play this very often if I'd paid out real money for it.

Reward comes not in points, but in money. Well, you don't actually get the cash, it's just that the score line has a dollar sign in front of it.

Diamonds are the most valuable and will net you $9,000 for each one collected (unfortunately, the game is American, so all the cores are in dollars).

Your only defence against the assailants is a limited supply of dynamite sticks. Pressing the joystick button will leave a lighted stick in your path, at which time a hasty retreat is advised. If you've timed it right, the explosion will kill the approaching meany. If you haven't then you've just wasted a stick of dynamite. Every unused stick at the end of a level is worth $3,000.

Generally, it's a very playable game that's also quite fun. The early levels are quite easy and I wouldn't imagine it taking too long to complete the game, after which time any challenge has worn off.

The graphics are good, and the sound of the gushing water is quite realistic. In fact, it gets quite annoying after a time (Think about it!).

O'Riley's Mine is available from Centresoft and runs on a Commodore 64. It costs £9.95.

A very playable game that's also quite fun. The graphics are good, and the sound of the gushing water is quite realistic.