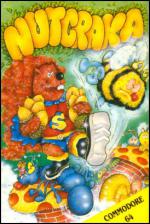 You are put in control of a squirrel (called Cyril) and you're just about to go into hibernation. You'll be very hungry throughout your deep sleep, so you've got to go round collecting nuts within the allotted time limit to aid you through the long, cold winter.

The nuts are dispersed over a scrolling landscape of two to three screens. There are eight different landscapes, which count as levels, and they increase in difficulty and slightly in size. The landscapes include trees, mushrooms, and brick constructions with shelves which allow Cyril to jump on them. The nuts usually reside at the top of the tallest trees, so you have to leap from plant to plant to get at them.

Just to make life difficult, several types of insects trundle around the screen and are fatal to the touch. Some are easy to dodge, like the ants and beetles which crawl along the ground, but the bees and butterflies fly about erratically and become a real pain to avoid, especially when you're leaping through the trees.

I thought Firebird were doing the Don't Buy This tape! Jet Set Willy, Hunchback at the Olympics, JSW II, and now THIS! Boy, are Software Projects churning out some rough stuff recently! This simplified collection game soon becomes boring quite simply because there's so little to do and the graphics don't exactly incite you to carry on for very long. I think it's about time SP pulled their collective fingers out and concentrated more on producing mega games than mega protection sheets. Oh well - at least, if you add it to your Jet Set Willy II code sheet, it makes good psychedelic wallpaper.

When I first saw this game (after a large number of unsuccessful loadings and ploughing through the needless and infamous Software Projects 'code sheet' (which is huge), I thought that it was a version of the arcade game Pacland. In a way it is, but it's an exceptionally poor one at that. Why Software Projects have to have these great big code sheets beats me, especially when the game behind is pathetic. The graphics are nicely drawn but quite unanimated and the landscape is literally tiny, it makes gameplay very limited and eventually exceptionally boring, although the time limits are quite tight. The graphics are quite nice but the animation and sound is a real let down. Even the reasonably cheap price doesn't justify such low quality.

What an odd game! Everything scrolls along smoothly enough and the graphics are big, crisp, and colourful, but what a let down - animation is virtually non-existent on all characters including Cyril. The quality of the sound is on a par with the animation - bad! A horrible screechy tune plays throughout the game and is combined with little in the way of sound effects. Gameplay is severely limited, there's no variation on levels, and collecting nuts is the only order of the day. There is a reasonable amount of challenge if you can stomach doing the same thing screen after screen.

Presentation 36%
Lacking in most modern amenities.

Graphics 60%
Nice looking and colourful but where's the necessary animation?

Sound 19%
No sound effects to speak of, awful, screechy tune which cannot be turned off.

Value For Money 35%
Cheap-ish for the C64 but still hardly worth it.

Cheap-ish for the C64 but still hardly worth it.