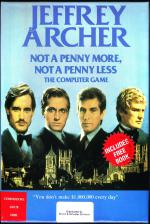 The life of high finance is not one which appeals to me I must admit. I'd much rather be faced with an enemy I could smash to a pulp than have to deceive and con to gain a possession which was rightfully mine in the first place.

Not A Penny More, Not A Penny Less is the story of Stephen Bradley and his unfortunate encounter with a devious businessman by the name of Metcalfe. Bradley was conned into pumping all his money into a company owned by Metcalfe, and the rewarded by having it collapse under him. Left virtually penniless, Bradley swears revenge on Metcalfe and in the process discovers three other businessmen in a similar situation to himself who also wish to see the ruin of Metcalfe. However, there is no proof that Metcalfe did what he did to these four men, and therefore the forces of law and order are powerless to help. They are on their own. Stephen tries to coordinate his newly found allies in such a way as to replenish their lost capital, yet stay within the boundaries of the law.

The game presentation isn't the best I've seen, incorporating dark blue text glaring out from a light blue background. The graphics, displayed at the top of the screen, are basic to say the least, and add nothing to the atmosphere. Below their designated area are the very brief descriptions of where Stephen currently is and what he can see. At the very bottom of the page is a single line for text input.

There is some speech within the game, but after hearing it for the first time, I turned the volume down.

The parser is a little annoying - it seems to understand most of the usual adventure type words, but the way they are input has to be very precise. Synonyms aren't its strong point. Also, the way to visit people in the game is odd as the player has to type EXAMINE [name of person] to get to see them, and it will only allow him to do this when certain events have taken place and puzzles have been solved! I found that in the first location I could type EXAMINE ROBIN and the game would reply 'OK' but I was still in Stephen's office!

The general objective is to fill Stephen's folder with information about Metcalfe and his other three victims (reading the odd magazine is very informative) and use it to regain his assets.

Once the many idiosyncrasies within the game have been mastered, the actual depth of play is revealed, which is somewhat disappointing. The computer game is no match for the book (which thankfully is supplied in the packaging) and it's quite frustrating to play. However, it's by no means a terrible program, definitely worthy of some perseverance - but not too much.

By no means terrible, but it's no match for Archer's book and it's quite frustrating to actually play.