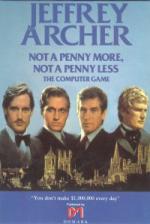 The books of popular author Jeffrey Archer sell in their millions, and I enjoyed Not A Penny More, Not A Penny Less when I first read it some years ago: It is a light-hearted romp of the "Don't get mad, get even" genre, with an amusing twist in the tail.

Consequently, I was delighted when the adventure game was released. I booted the 40/80 track disc - to receive an error message. I managed to load the program by switching my disc drive to 40 track mode but, try as I might, I could not boot it in 80 track format. I have ordinary Cumana switchable drives and an Acorn DFS.

The loading screen showed a cleverly-drawn picture and there was a prompt asking which of the game's three parts I wished to play. I loaded part one and discovered I was to be cast as Stephen Bradley, the American academic working at Magdalen College, Oxford. My task was to recover the money I had lost by investing in an oil company floated by that rogue Harvey Metcalfe who was now laughing all the way to his Swiss bank at my expense, and that of three other luckless punters.

I confess I liked neither the constant use of upper case letters nor the sloppy screen layout of the descriptions. They looked amateurish, as if the conversion for the BBC Micro had been delegated to the tea boy, but I persevered.

Starting in my room at Magdalen, I began to enter instructions, and rapidly discovered the limitations of the parser. I began to suspect that the tea-boy's understudy must have had a hand in it, too.

Opening and examining various things I discovered a camera, three dossiers, Principia Mathematica, The Tatler and some phone numbers.

I dialled Scotland Yard and my stockbroker answered! He proceded to give me details of my fellow victims and I began to suspect the tea boy of even darker designs. Tea boys don't know that an essential input from an adventurer is INVENTORY - or INV or even I - so that we can keep track of what we are supposed to be carrying. Naturally, the parser of Not A Penny More does not acknowledge the existence of such a combination of letters.

Similarly, tea boys don't expect the present-day player to abbreviate direction input: There was no response to commands like N or S, and only GO NORTH and the like produced results!

Opening a door and leaving my room proved impossible - was I to be trapped there forever? Never! Trust your old Hatter friend to try the daftest procedures known to mankind and deliver the goods:

EXAMINE JEAN-PIERRE ... instantly transported me to Bond Street, and I then found my way to Pall Mall and did some shopping

EXAMINE JAMES ... teleported me to the Bodleian, an attractive librarian and various tomes

At this point my waning interest finally evaporated. Usually I try to find at least some redeeming feature in an adventure game - well, the package includes the book which I enjoyed. As for the rest, there's a reversible disc with approximate value 50p - not a penny more, not a penny less.

Usually I try to find at least some redeeming feature in an adventure game - well, the package includes the book which I enjoyed.