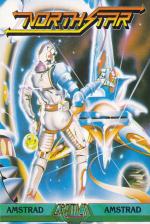 Due to a lack of food, a top secret project was undertaken by the four Earth-Lords. The project was a massive space station on which huge quantities of food were produced efficiently and quickly. The last shipment of food failed to arrive and all has gone silent on the space station.

On arrival, you find the station in the hands of aliens. In the lower part of the screen, there is a status panel showing your oxygen level, score, number of lives and any weapons carried and the upper part shows the space station and its occupants. At the start of the game you will find cylinders that contain other weapons. The other weapons are accessed by smashing the cylinder with your arm and collecting the contents which will drift up towards the top of the screen.

There are five weapons that you can collect: extra long arm (so you can kill your enemies at a greater distance), a smart bomb, a weapon that lets you shoot upwards (which is very useful on later levels), a pair of boots that stop you from sliding and finally a limited invulnerability to make life a little easier. Unfortunately, whenever you lose a life you also lose one of your weapons.

The music on the title screen is excellent and the effects in the game are splendid too. Colour is used to great effect and the graphics are well drawn. There are nice touches to the graphics like the way you slide to a halt.

If you want a game with lots of aliens to kill and little thought then this is for you. In the long term you may grow tired of it, but in the short term there's plenty of fun to be had exploring the large space station.

It's an obvious derivative of games like Exolon, Gryzor and Green Beret, but competently put together. The graphics are delightful in all departments, rivalling even Exolon's. The gameplay can get frustrating, because there are times when you just can't help dying, but at least you don't get sent back to the start.

No problems seeing everything.

Staying Power 65% P. Nine levels of fast and furious action. N. Not much variation from level to level.

Overall 73% Good fun, but lacking in the long term