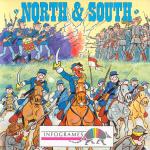 Sacre Blu! Ce'st formidable. Only last month, Infogrames picked up a an SU Gold award! ("Mon dieu", he said just before he fainted and had to be resuscitated with a clove of garlic.)

North and South is a strategy arcade game that puts you in the trousers of an American soldier during the Civil War. (Well not ACTUALLY in his trousers - they might not fit too well). You can play against another player or the computer and are either North or South, depending upon your political preferences. You must destroy the Confederates (or Yankees) and can start at any year between 1861 and 1864 and the map of America, will show you the correct historical state of the battle at that time and all you then have to do is to unsheath your sabre and charge!

The options menu is extensive - there are three optional disaster scenarios; indians which may attack at any time, storms which move around and stop all fighting and European reinforcements which are dropped off to whichever side happens to own South Virgina (Lordy, lord. I just love y'all walking through my lounge!)

North and South is a great game that will cover all options for both arcaders and strategists alike, thanks to the optional strategy mode where the computer determines the outcome of battles. There's a wealth of fun to be had here so, as they say in France, "Alez!"

This is a really great game involving your trigger finger and putting your grey matter to the test. "Formidable" as the French say.

This is a really great game involving your trigger finger and putting your grey matter to the test. Formidable, as the French say.