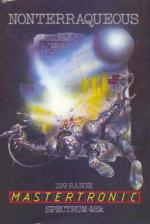 SEND a robot seeker into an underground maze, find a computer console, blow it up and you've saved the planet.

The theme of Mastertronic's Nonterraqueous is all too familiar and bears some resemblance to all other maze games of the same ilk.

Once you've got your magnifying glass out to read the instructions, you will see that the game is all about keeping your psyche levels up. Some objects will give you psyche, others decay psyche - when you have no psyche left, you are dead.

Start off point seems to be around level 40. The robot, a little metal blob, whisks into the air and the search is on. Blast away at a few flying aliens and find a bomb.

When detonated, that blasts a hole through one of the electric fences which bar your passage. Photon thrusters block many paths and are fatal if touched. They also tend to come in twos and are the most frustrating aspect of the whole game.

Some objects carry the word Swop, which means you can go into defenceless mode. The robot turns into a helicopter which cannot fire and though that apparently has its uses, it is not needed in the early stages.

For all that, Nonterraqueous is fast with smooth graphics. Though not the most exciting game around, it is good value and should take some time to complete.

Fast with smooth graphics. Though not the most exciting game around, it is good value and should take some time to complete.