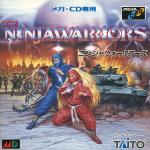 Abraham Lincoln, George Washington, Ronald Reagan and of course Bill Clinton. America's presidents have always been known for their, er, honesty and integrity... um, until the evil Banglar came along!

Once he was voted into office, he took it upon himself to become president of the world! He started at home, taking control of the underworld. He used drug and prostitution money to firmly entrench himself in the presidency of America, disbanding congress and killing any one who stood up against him. Now, with the states in his control, it's only a matter of time before he attempts to take over the entire world!

It's down to one lone inventor to save the day. Using his resistance pals to supply him with the necessary equipment, he devises and creates two robots with superhuman strength and the mystical might of the ninja! However, he needs a skilled human to take control of his creations. That's where you (and of course, your ubiquitous pal in two-player mode) come in.

You've got to use your joypad abilities to guide the ninja through the scrolling levels that make up the president's defences, and then murder him! Simple, eh? Or is it?

Ninjas are well known for their shuriken death star-related tom-foolery. Therefore, it should come as no surprise that our robo-ninja pals have similar skills. They start the game with thirty of these weapons and are able to magically conjure up five more after about half a minute should they run out.

Shurikens are best used as range weapons, with the ninja blade being used to kill close-up meanies. Two death stars are required to kill off your average foot soldier.

The evil president obviously has access to a brilliant cloning machine that enables him to clone off several thousand identical soldiers and dogs. As you may have gathered, what this generally boils down to is a severe lack of variety in the game's line-up of enemy sprites.

However, later levels of the game do introduce several new types of meany to complement the cloned hordes, including robots and fire-breathing circus refugees.

Ninja Warriors is virtually identical in terms of gameplay to the arcade original, meaning that two players can take to the console for simultaneous fun and frolics... sort of. The gameplay actually becomes even more boring since you only have to deal with half the enemies and there's no interaction between the players whatsoever. D'oh!

Hold down the slash button and your ninja enters defence mode. Somehow, crossing his ninja blades manages to protect him from just about any sort of damage that the legions of enemy sprites intend to do unto him.

The only way for the enemy to break through this defensive posture is to either fire bullets at him or walk directly into him.

On the title screen there's a special Zuntata option which reveals more about the background of the game. However, the intro soon changes into a sad slideshow "pop video".

In this audio-visual feast, the player is treated to strobing slides of the music's composers during one of their "gigs" (at least that's who we think they are). The music you can swing your pants to is the game's main theme!

The robo-ninjas start the game disguised as the real masters of ninjitsu, with only their bizarre marching animation giving away their robotic origins. However, as the game progresses, the ninjas suffer battle damage that shreds sections of their clothing and exposes their metallic limbs.

I've just been to the ECTS show where I saw Mega-CD games like Thunderhawk that really show that the Mega-CD has a shining future.

And then I return to the office, where I discover Ninja Warriors - a game that throws the Mega-CD back into the dark ages! Apart from the CD sound (which is actually rather cacky), there's nothing at all to differentiate this game from a sad, shambling, substandard Megadrive game.

The sprites lack decent animation and definition - I've seen better on the Master System! The backdrops are worse still, far worse than the average 8-bit game. But it's the shambling gameplay that hammers home the final nail in the misshapen, ramshackle coffin that is Ninja Warriors.

Not for a long time have I played a game so mind-numbingly tedious as this. What made it worse was that I had to keep playing this game enough to do a fair review (even while the courier arrived downstairs with the Jungle Strike review cart!). Suffice to say, it was a deeply monotonous experience from which I am only just starting to recover.

What can I say? Keep away from Ninja Warriors - the really good Mega-CD stuff is just around the corner so stay away from this utter cowpat of a disc!

I'm behind Rich one hundred per cent on this - Ninja Warriors is the sorriest excuse we've had for a game since the awful After Burner III. The thing is, it's not really the fault of the programmers.

Obviously, they were ordered to faithfully convert Ninja Warriors to the Mega-CD and this they have done. The thing is, the original coin-op was mind-numbingly tedious with very little in the way of thrills or reaction testing.

The question on my mind is: why bother converting this lacking coin-op? It wasn't a major hit in the arcades and the concept is years old. We should be seeing all-new games on the Mega-CD, games that really put the innovative hardware to good use. Ninja Warriors is not one of those games.

You'd have to be a drooling, gibbering fool to invest your hard-earned pounds into this sorry game.

Presentation 77%
P. There's an exceptionally amusing Zuntata mode which details the background behind the game. There are plenty of options as well.
N. The actual in-game presentation is of 8-bit standard.

Graphics 43%
N. Urghhhhh! Ninja Warriors features graphics that would be more suited to a Master System game than Sega's top of the range CD technology. The sprites are sad and monotonous and the backdrops are horrendous.

Sound 50%
P. The music consists of one of those tunes that you don't especially like, but doesn't get on your nerves in a hurry.
N. The sound effects are extremely samey.

Playability 38%
N. Although easy enough to get into, it only takes a few moments before you realise that the sad, monotonous gameplay isn't likely to change much the further you get into the game.

Lastability 20%
N. The game just grows too boring too quickly. Usually a two-player mode enhances a game's longevity. The opposite is true here.

Overall 30%
Ninja Warriors takes us back to the days long ago when all Mega-CD titles were complete cack, with an 'intriguing' intro taking up the CD space. A waste of money, basically.

The programmers were obviously ordered to faithfully convert Ninja Warriors to the Mega-CD. This they have done. The thing is, the original coin-op was mind-numbingly tedious with very little in the way of thrills or reaction testing. Hence what we have here is a waste of time.