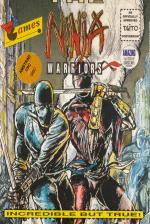 Nostrodamus predicted many things: the out-break of both world wars, the Kennedy assassination and the Austin Metro fifth gear option in 1985... one thing he overlooked, however, was the decay of society in the early '90s and the subsequent rise of Bangler's evil empire. Had he foreseen this, then work on the "Ninja Warriors" could have begun years earlier, much suffering could have been avoided and many lives saved.

Unfortunately, the whole world is now under the control of the tyrannical Bangler and times are desperate. The only hope lies with a group of research scientists sworn to his downfall - because he scrapped their study grant! They've perfected robots of awesome potential; perfect killing machines that fight by remote control, cutting out the rather obvious danger of dying if you try it in person!

The Ninja Warriors have toughened steel skins, lightning-fast reactions and two lethally-sharp katanas. They face an awesome array of all that's nasty, mean and vicious in Bangler's vast army. Tanks, soldiers and mutated super-beasts wait en route, trying to stop you killing their leader, saving the world and making it home in time for tea.

The field of battle is a long thin, cinema-style screen which the Ninja Warriors fight across. They walk and leap to dodge bullets, occasionally stopping to clear a path and pack some Bangler boys into body bags. The controls are simple enough: ducking and standing. you can lash out instantly with the swords. If they're too far away for cutting, then throw a death star to send some more mutants to meet their radioactive maker.

To begin with, your super-powered killing machines are in little danger, just the occasional rifle shot whizzing past their metal ears. Life gets tougher when mutants drop out of the sky, huge tanks roll on, and hang-glider hit-men swoop m. all eager to fight. Fire-breathers and superbaddies are your foes, but as your boys are really ultra-mobile battletanks. the odds are even, especially in two player mode!

A Ninja Warrior's life expectancy is measured by the amount of damage his armour takes before his vital systems fail, causing a beautiful but final firework show. The number of hits is indicated on an energy bar and this is the only vital statistic worth watching. Time is irrelevant, high scores of little more than academic inter-est, the challenge being to reach areas never before seen through the ninjas' electronic eyes.

Gameplay is a simply matter of timing jumps and blows to avoid shots and maximise the body count. Graceful forward flicks take you flying over foes to strike from behind. The risk with this ploy being the possibility of landing on your enemies, as touching them - strangely - causes as much damage as being shot!

The easy option appears to be firing off one of your thirty shuriken to kill from long range, but restrain yourself! These are need-ed to destroy the end-of-level guardians. Death star economy is frustrated by the ease with which they're thrown accidentally. Touch Fire while you're out of sword range and a shuriken flies from your paw never to be seen again. The only safe rule of thumb has to be: only strike if you can smell their breath, otherwise stay low and bide your time.

The arcade history is instantly apparent, especially in two-player mode. End-of-level guardians are tough, but the each can be defeated if you're willing to waste a few lives in experimentation. Graphically, the long thin screen tries to recapture the three-monitor-wide arcade original - the two stars of the show stayed and fought on the central display, but the bad guys could fire and throw things at you from either side - a stunning, if pointless, effect. The CPC version tries to emulate this, but the overall impact is naturally lost.

The music played during the opening sequence sounds vaguely Japanese, but that's where the continuity ends. It's yet another arcade-style jingle that sounds totally out of place around mass murder and mayhem. There are the standard effects too, but little else to send the ears into raptures. The music and effects adding nothing to the game.

The small but clear sprites try to bring the conversion to life. Playing with two means double the fun fending off attackers from all directions. But crafty and clever coding cannot disguise the lack of gameplay, a factor further highlighted by the ease with which the life-saving death stars are squandered and the overall vulnerability of the Ninjas, touch-wise.

Ninja Warriors proves, yet again, that big arcade hits aren't necessarily destined to be brilliant home computer games - regardless of the programming skill employed in replication. It's a fun game, but lacks the involvement to keep you plugging away into the wee small hours. Occasionally, though, you'll find it an amusing release to turn Bangler into a bungler; not with cutting remarks but the swords of your Ninja Warriors.

Your ninjas do really neat forward somersaults, but that's about it.

A reasonable conversion... Your ninjas do really neat forward somersaults, but that's about it.