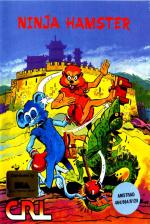 After a long journey, you return home to find your village being terrorised by a group of evil creatures. You are a hamster with martial arts abilities and decide to rid your village of the nasties.

You have a variety of manoeuvres that you can use to kill your opponents, such as kicks, jumps and blocks. Each time you hit your opponent, his energy goes down until it reaches zero. A bite is then taken from the apple over your opponent's head and when only the core is remaining he dies. If you run out of apple then you die and the game ends.

Your eight opponents are Sinister Rat, Lizard of Death, Mean Monkey, Barmy Bee, Crazy Cat, Perilous Parrot, Mad Dog and Loony Lobster. The first few opponents are easy to beat, but later ones get better and better at fighting. Other hazards appear on the later levels in the form of flying boxing gloves and maces that drain your energy. The opponents are loaded in two at a time until you have encountered all eight, when the village is saved.

Animation is poor and very little colour is used in the game. The character graphics are large and well designed. Sound is simply that of landing a punch or kick on your opponents, and a title tune.

If you want a good martial arts program then Ninja Hamster is not the one. It looks and feels badly programmed. Very disappointing.

Combat games are all washed up in this sort of form. I thought Barbarian was stretching the point, but even a bit of mickey-taking like this fails to interest. It's all very well to have what you might call a 'spoof' martial arts game, but if the gameplay is just as boring as all the previous ones, then the joke would appear to be on whoever buys it. As ever with these things, the two player game has some merit, but that can't be used as an excuse for not having a decent one player game. It's time this one was given the chop.

Staying Power 39%
P. Martial arts freaks may find it occupies them for a while
N. Too easy to complete

It's all very well to have what you might call a 'spoof' martial arts game, but the joke's on whoever buys this.