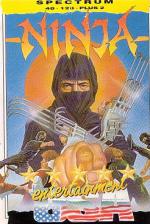 If you're a budget Ninja do you only get half the lessons from your guru? Do you find yourself short of spinning death stars at crucial moments? Is your animation a bit dodgy? Not if you're a Mastertronic Ninja you don't.

This is yet another in the long, long line of martial arts games threatening to bore you all silly. But at least Ninja isn't boring. You may have seen and played it all before, but it isn't dull.

It's a sort of Kung Fu Master clone. Our hero has to rescue Princess Di who apparently is being held prisoner in the Palace of Pearls. Does Charles know about this? Anyway, our Ninja has to battle heavily-armed opponents to win idols dropped by Di.

Each screen contains a different challenge - opponents gather in numbers as you progress and they are armed with swords and death stars as well.

Use the seven different movements available to kick, punch and slash your way through the many and varied levels of the palace. Use your weapons carefully and watch your strength meter at the bottom left hand side of the screen. Early screens are easy with only one opponent to defeat later screens get more difficult.

The game is also mapable with nice captions under each screen to give you an idea where you are in the palace.

Ninja is a basic martial arts bash - nothing new, but if you enjoy this type of game then it's great value at under two quid.