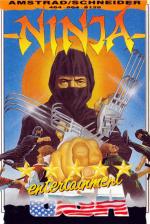 Ninja is another martial-arts game (Surprise, surprise!). This one, however, strays from the normal path of righteousness by adding a princess to be saved: You must save "Princess Di-Di", the pearl of the Orient, who was taken prisoner by the evil Master of the Palace of Pearls.

You start off at the bottom level with a few opponents to fight - never more than one at a time. You can pick up deathstars (shuriken) to throw at your opponents. Four or five chucks of these will render your opponent dead. He falls into a glob of greasy mucus. As well as deathstars, you are equipped with a "slashing" Samurai sword.

The movements available are jumping, punching, kicking and hitting. You need not kill all the enemy on each level to progress to the next. Simply find the room with a hole in the roof and jump when directly beneath it. Opponents get meaner as you get higher. Each progressive level adds an opponent to each fight.

Along the way, as if killing a few hundred ninja warriors weren't enough, you must pick up idols which Princess Di-Di has dropped to test your worth. What's with this woman? Does she want to be rescued or not?

Well, all right, for the price, it's not bad, but I'm fed up making allowances for budget games and really don't care for it. The graphics are very plain, and the sound lacks volume and realism. The game is difficult, perhaps too difficult. You know those ninja films where every character's mouth moves for about a second either side of the speech? Well, this game emulates that very well: you press the keys, and a second later your bloke moves. Ah well, it is only £3.

At first sight this seems a very playable game. But that's deceptive because the action is too difficult and repetitive. With a little more tweaking this could have been a good game but as it is, I don't care for it. Doubtless it will sell well but I suspect there will be some disappointed people.

Staying Power 51%
N. Completing the whole game is very difficult.
N. Getting far at all is too difficult.

Overall 64%
P. Not many budget martial-arts games around.

Fighting and exploring is interesting but completing the whole game is very difficult.