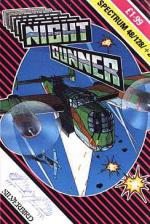 Another old Digital Integration classic is rolled out of the hangar doors. This was first reviewed in Issue 3 where it was Game Of The Month - CRASH Smashes had yet to be invented.

The game has you as the gunner and bombardier of a WWII Lancaster. There's thirty missions in all, each divided into three sections. In the two gunner sections you're defending the plane on its journey to, or from, the target area. Enemy fighters appear as specks in the distance, then coming sweeping in to attack, machine guns flashing. A gunsight is moved around the screen to intercept them, fail and damage builds up - sometimes jamming the gunsight!

When you arrive at the target you start your attack. Missions alternate between high-level bombing strikes (looking down on the scrolling target area) and low-level rocket attacks (flying into the screen and diving down to attack targets).

A true measure of a great game is how it stands up to the ravages of time and Night Gunner has certainly aged well. The sheer amount of missions, the variety of gameplay and toughness make this a formidable challenge which should keep you playing for ages. If you haven't already got it - get it now!

The sheer amount of missions, the variety of gameplay and toughness make this a formidable challenge which should keep you playing for ages.