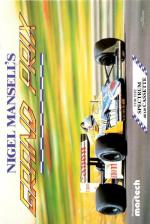 You may get the girls and pots of money, but danger and death stand grinning by your shoulder in the fast world of Formula One racing. And to keep them at arm's length practice must follow practice till the Williams car you drive is under perfect control.

A careful, dangerous balance must be struck between racing the car as fast as possible and yet not overstraining it - mechanical problems can lose you a race or your life.

For instance, steering the correct racing line through corners helps reduce your lap time - but if a mistake is made and you leave the black tarmac, vital time is lost and your car could even spin.

Combine late braking into bends and speedy acceleration away from them with the accurate steering that you need to overtake, block and corner, and you have all the makings of a champion driver (real-life formula One champion Nigel Mansell and the manufacturers of his Williams car worked on Martech's game).

But of course you're not the only one on the track. Other cars can be awkward obstacles if they too are taking the correct line, and you must protect your position by not letting them pass you. To help you, wing mirrors at both sides of the screen show the traffic to the rear.

One of the most important instruments on a racing car is the rev counter, which helps you keep the engine at optimum power - ideally you should stay between 9000 and 12000 revs. Try less than that, and insufficient speed is generated; go beyond the upper level, and the engine can be damaged, and much valuable fuel consumed.

To keep the engine revs within the power band you must change gear at just the right moment - and the Williams can go through six finely-graded gears.

Below the main screen is a console, giving you vital facts about your car and its state of health. A turbo-boost indicator shows the additional boost applied to the engine - by engaging boost tremendous extra power can be called up for daring overtaking manoeuvres and to gain vital time on your opponents.

Fuel levels, oil temperature and pressure, and water and turbo temperature are also monitored and must remain within safe parameters.

Another onboard display keeps track of your racing performance, giving your current speed, your lap time, your average speed for the lap and your best lap time, the fuel level, the current rate of fuel consumption and the mileage left at that rate.

If the worst happens and your car breaks down, or crashes, a message window displays the reason for the failure - or simply informs you that your car is too badly damaged to continue.

Each Grand Prix race is preceded by a practice session: one warm-up lap and three qualifying laps. The faster your qualifying-laptime, the better the position you have on the starting grid. But if you fail to complete the qualifying laps in time, more practice is necessary before you can join Nelson Piquet and Ayrton Senna on the grid.

After qualifying you go through a stomach-churning wait while the last few seconds tick away, surrounded by noise and the smell of burning rubber - and then the green light shines and you're away with tons of hurtling machinery.

Use the instruments well and make pit stops for fresh tyres; the new rubber can stop you slipping or even going off the track. Tyres are changed automatically when you enter the pit stop, and you can make as many stops as you like - but think carefully, balancing the benefits against the lost time.

Each Grand Prix season has 16 races on different tracks (a half-finished season can be saved to tape or disk), And you can drive each race for five, ten or 20 laps or a full-length Grand Prix distance - the choice is made at the beginning of the game and then fixed.

Points are awarded for finishing in one of the first six positions, and accumulate over the season to determine the champion of this hard, fast sport.

Joysticks: none
Graphics: all the cars and the scenery are the same colour, so it's soon a race against eyestrain - and the stripy grass doesn't help
Sound: not tunes, excellent 128K revving and running noises, simple 48K effects
Options: practice or race for real; 16 different tracks; choose number of laps on each

'Nigel Mansell's Grand Prix has the decency to use the whole width of the screen for the track, the loss of simulated hills is no real loss, wing mirrors are a useful innovation, and the scrolling is kind of smooth. But it's the sound that really draws your attentions to this game - and to the 128K version especially.'

'This is undoubtedly the best race simulator (as opposed to Enduro Race-style game) on the market today, so it's highly recommended to those who want a simulation. But though it's satisfactorily playable, nonspecialists might find the demands of accuracy and concentration wear thin and that there's little long-term addictiveness in Nigel Mansell's Grand Prix.'

'I was heartily disappointed by Nigel Mansell's Grand Prix. Supposedly it was ten months in development - but I can't say it shows! Graphics aside - the best place for them - the game shows some promise, but basically it's a very cheap clone of Firebird's Commodore 64 hit Revs. Cornering, the most important part of any race game, feels very realistic but the graphical representation of it is very poor and ruins the atmosphere. And though the race starts very competitively with cars swarming around, once they've disappeared into the distance (which often happens) the addictiveness goes right out of the exhaust pipe. Oh well, back to Full Throttle, I suppose.'

Although the race starts very competitively with cars swarming around, once they've disappeared into the distance, the addictiveness goes right out of the exhaust pipe.