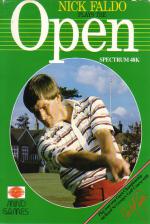 The game is played over a 900-screen scrolling map based loosely on the Sandwich course. Ifs this detail plus the nice icon graphic system illustrating golfer and (sometimes abusive) caddie that makes the game. Easy to understand, nice to look at and as difficult as you want.

Criticism? Only one - when it comes to putting there is no close-up of the green around the flag and the scaling therefore makes it at least partly a matter of luck whether you finally hole the ball. Never mind. It was good at £6 or so. At £2.99 it's an absolute steal.

Excellent golf simulation, spoilt slightly by no 'close-up' of the flag section. Great value on budget.