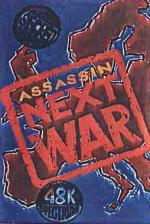 Next War is a battle simulation with a scenario set in the near future with the NATO forces under your control facing a massed attack from the Warsaw Pact battalions. With an option to initiate nuclear warfare, Next War should probably be played to a background of Frankie Goes to Hollywood. The game is for one player against the computer and operates in an interesting manner, namely that all your allowed moves for vanous units are entered and when this is completed. the computer moves its forces one move at a time, while the computer displays the moves you have already entered, also a move per unit at a time. This eliminates, to some extent, the usual draw back to so many strategy war games that units seem to make enormous leaps across the countryside in a flash.

There are six main scenarios included in the program, all loaded at the same time, and these comprise: 1) Base Defence - an introductory scenario; 2) Surprise Attack, where you must rush forces to the front to hold off the Warsaw Pact forces, who have attacked from barracks: 3) NATO Last Stand, the destruction of the last NATO units on the continent of Europe: 4) Reality, which shows what would really happen were the Warsaw Pact ever to attack; 5) NATO Counterattack - a dream scenario! 6) User designed, which enables the player to set up game elements to his/her own choice.

As you can see from the above, Next War takes place on the plains of Germany. The map, basically a green screen, shows the location of cities, towns, hills, forests and swamps. Your forces are infantry, engineers, helicopters and tanks, which are shown in white and facing left, while the enemy forces are shown in red facing right. This orientation is important because information lines at the bottom of the screen will show what type of unit has defeated or been defeated by you with a black symbol and the direction it is facing in is a quick reference.

Units may be moved in 8 directions and a certain number of moves depending on the unit type. Units which may be moved flash and pressing the appropriate direction key will cause it to move one step. This way, units may be moved with great flexibility. With the move completed, the unit symbol returns to its start position to await the Movement Phase, units of both sides will try to fulfill their orders and fight automatically with any results being displayed in the information line. Artillery has a range of 3 squares, and targets must be selected. According to air strength available an option for an airstrike on a single target may be offered.

The basic objective of Next War is to hold the Warsaw pact forces for long enough to allow NATO reinforcements to arrive. According to current trends of thinking, the player will be doing well if he can hold off the enemy for at least 25 turns, at which point reinforcements should arrive and a victory can be possible. The timescale is 12 hours each turn. Between turns there are two phases which are very important - the Reinforcement phase and the Command phase. The first allows the allocation of reinforcements (if there are any), the second offers options to see the enemy's structural make-up in rough or in detail and ask for command aid (usually refused in the opening moves). There is a lot more to Next War than can be usefully contained in short review, and much of it must come from the player's experience as the instructions are not particularly detailed.

'This game has a very gloomy outlook for the future with five different levels of play to destroy mankind, plus one level you can define whether to nuke the Russians or bomb them to hell. I thought this was a very poor war game which lacked realism, using small graphics that don't resemble tanks or anything like a weapon at all.'

'Next War is one of the most flexible war games I have played of this type - that is, moving forces around and playing the computer. A/though you are up against overwhelming forces, strategical disposition of your units can allow you a great deal of success. Assassin have also overcome one of the more boring aspects of such games (the Movement Phase) by turning it into an animated move by move sequence which does require the player to act on artillery and airstrike attacks. A continuing drawback to the baffle game, however, is the scale of the graphics. Naturally, on an area as big as this and with the amount of forces in action, there is a limiting factor to the size of the characters you can have. The result is always less than satisfactory and Next War suffers with this too. I think the ardent war gamer, who will undoubtedly enjoy the tactical operation as much as I did, will also seriously consider the use of a home-made board to control the game, or at the very least a list. One drawback I discovered to Next War is the rather limited instructions contained on the inlay. It is hard to discover at first what your units are, comprise of or are doing, and note taking is recommended until you are completely familiar with it all.'

I think the ardent war gamer, who will undoubtedly enjoy the tactical operation as much as I did, will also seriously consider the use of a home-made board to control the game, or at the very least a list.