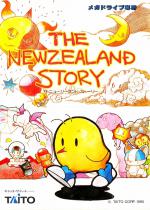 Tiki is a little yellow kiwi, who lives with his kiwi chums in a New Zealand zoo. At least, he did until big, bad Bluey the walrus broke out of his enclosure, shoved the kiwis into a big sack and made off into the hills with them, intent on flogging them off to unscrupulouos pet shop owners. Tiki escaped by a whisker, and made it his business to go off in search of his imprisoned pals before they end up in horrible, cramped cages.

But the task isn't as easy as he first imagined. There are twenty stages to negotiate before young Tiki reaches his friends, and each level is jam-packed with Bluey's cronies. What's worse is that, at the end of every fourth stage is a large guardian who will try everything to stop our feathered friend from reaching his goal. At the end of the game there's Bluey himself - and he's a bit more than a match for the chirpy chappie who hasn't been hatched for much more than a minute!

Help along the way comes in the form of bombs, laser guns, hover pads, hot air balloons and rubber geese (to get the flightless foul airborne).

The levels in the Megadrive conversion are different from, and slightly more difficult than the arcade game's, but it still oozes excellence, featuring cute and cuddly sprites, marbellous tunes and sound effects, and gameplay which you'll find hard to beat outside of an amusement arcade!

The challenge to get through each level is immense, but you're aided along the way by a host of weird and wonderful items. Even so, you'll find the going tough and demanding and it's a good job that there's a continue option built in.

Everything has been included in this conversion - it even has level warps! It might not be to everyone's taste, but if you're the sort of person who craves brilliant arcade conversions, then do not ponder your next purchase a moment longer; get hold of a copy of New Zealand Story today!

This is a cracking conversion which will move than please fans of the coin-op and cute platform games in general. The graphics are top-class, even though they tend to slow down when there's a lot on-screen, and colour is used liberally throughout.

Sound is above average, but the tunes become irritating after a while because they're very high-pitched and squeaky. Playability-wise, it's difficult to find fault. All the levels and features of the original have been squeezed into the cart, making for fun, addictive gaming which will outlast a lot of other PC Engine titles, even after you've completed it.

This is a cracking conversion which will move than please fans of the coin-op... and cute platform games in general.