Published in The Micro User 8.03 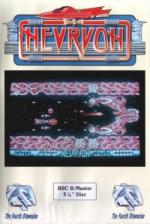 It's time to save the universe again. On this occasion your planet, Nevryon, is being attacked by aliens lusting after your supplies of titanium. As usual, you are the planet's last hope and with you go the remaining resources and the last six ships. A nicely drawn title scrolls up to reveal a whole set of options - volume control, skill level, speed, start on different level - which requires a password - colour or mono screen switch, screen resolution and sound volume control.

From there you move to the map and icon display which give you further options such as a choice between keyboard and joystick, sound on/off and start game. There's also current and high scores plus number of ships and credits remaining. There are two levels for each of the four scenarios and after each scenario is completed you are returned to this screen.

You get six ships and three credits at the start, the credits allowing you to restart from the point where you lost your last ship. If you use the passwords to jump the levels you don't get any credits.

The game play area is a fairly thin strip across the top of the screen - and the terrain scrolls from right to left. You can manouevre your ship from the left of the screen to two thirds of the way to the right plus up and down using the usual control keys. The game is quite simple: Fly along shooting the aliens, blowing up various parts of the terrain as necessary, avoiding missiles and bullets, flying carefully around various structures and finally blowing up the big thing at the end.

For every 10 aliens you remove you get a bonus pod which adds to your fighter's capabilities - rapid fire lasers, battering ram, gun droid and missiles. The gun droid is a little ball that Jags along with you and fires a stream of bullets of its own. Missiles are fired off at regular inter vals from your ship and are much more destructive than bullets - you really need these last two once you reach the final object.

The first two levels are based around the alien spaceship into which you fly. You must get through all the defences consisting of gun towers and forcefield generators to reach the fortress at the end.

Next up is the asteroid base which is similar in content but also houses rock-throwing mushrooms. After this comes the surface of the alien planet and its cave system and things begin to get even more outlandish.

Finally there's the alien beast. You actually travel through itand there's quite a surprise awaiting you in this section.

This game is a very good attempt to copy the sideways-scrolling games commonplace on 16-bit machines. However, the implementation is not as clean as it could be: Where one sprite crosses another you get a black corner, and the whole playing area is being software scrolled. This results in the graphics getting flickery when a lot is happening.

Having said that it's a good game and fun to play.

Definitely worth getting hold of.

Definitely worth getting hold of... A good game and fun to play... Graphics do become flickery when a lot is happening.