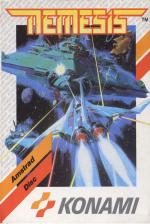 It's here! The Number One Arcade Game of 1986 is now on *your* home computer. Konami have released this coin-op classic on their own label - and it's a real blast.

It may not be as fast as its arcade cousin but it's just as playable.

If you've not seen the arcade game - where have you been hiding? - you won't know that it's a sort of "super-Defender".

Lots of action, combined with total addictiveness make the computer version of Nemesis a must for true gamesters.

Seven levels of increasingly difficult zapping with some truly spectacular nasties await you.

You begin the game in the sedate surroundings of deep space. Suddenly some swirling blue gizmos come at you in waves. Destroy an entire wave and a pod appears which contains an extra device essential to success. And that's just the beginning of a whole new adventure.

Collect a pod and one of the six icons or boxes light up. The boxes are Speed-up, Missiles, Double, Laser, Multiple and the mysterious '?'. Speed-up is obvious, it enables you to duck and weave faster than normal. Missile equips you with a ground-to-air projectile which knocks out ground emplacements. Double gives you another gun which fires at 45 degrees - useful for KOing nasties at the top of the screen. Laser wipes out everything in your line of fire - although you can't have it as well as Double and Missile (It's either one or the other, I'm afraid!). Most of the time it's better to make use of Double and Missile-Laser is useful when you're knocking out end-of-level motherships. The '?' gives you a random device - some pods act as 'Smash' bombs zapping everything in sight!

All the elements of the arcade version are here, the deadly Easter Island statues, skeleton dinosaurs, swirling amoeba things and, of course, the horrible brain waiting right at the very end.

Pick up enough of the pods and build up a big arsenal of weapons you can get a whole lot of stuff happening on screen - and nothing slows down. Amazing!

Graphics are colourful and sound effects are pretty good. The theme tune could be a bit punchier however.

The game scrolls along smoothly - the computer determines the speed but you can zap backwards and forwards at will shooting, dodging and weaving. Neat stuff!

Not much more can be said about this coin-op conversion, except that it's Fun with a big F.

Fun with a big F. The game scrolls along smoothly - the computer determines the speed but you can zap backwards and forwards at will shooting, dodging and weaving.