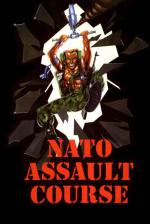 What have the Hitman, the Ninja, the Flame and Tommo got in common. Silly names? Green clothes? Well, they all appear in this game of hard men. You've got to choose whether you want to join their ranks, because if you're to live up to your nickname of the Okapi, you'll have to complete a tortuous assault course in record time.

Each consists of a vicious array of obstacles including money bars, barrels and walls to climb, fire pits to leap over, water and cement troughs to swim or wade through, and target ranges, some of which even shoot back. Lots of fast joystick-wiggling is essential, for there's a person on the bottom half of the screen who is just as keen to take that promotion to the Falkland Islands as you are.

If you find the going far too tough, then take advantage of the icon-driven course designer. They look after you in the army, y'know.

Blimey, this game is a real pain! I don't just mean it's irritatingly boring (though it is), but it's actually physically painful. You have to wiggle the joystick almost non-stop for ages, and while you're spraining your wrist doing that, the music is giving you a headache.

It was lucky the dull graphics and boring action forced me to leave the joystick after one game, or I might have been really wounded in action. Not recommended.

You're lucky I'm able to type this review after the bashing my right arm's taken from this game. And was it worth it? No, not really.

You have no chance of beating the computer opponent unless you're some kind of muscle-bound freak - because you're expected to waggle the joystick almost constantly for several minutes.

And if the exhaustion doesn't kill you, you'll probably die of boredom. Take it away, someone.

Presentation 73%
Nice title screen and easy-to-use course designer, with load and save options. Why anyone should want to design a course is unknown.

Graphics 42%
Soldier sprites are reasonably well animated but slow, and everything comes in very dull colours.

Sound 28%
An awful rendition of Colonel Bogey; headache, for the inducement of.

Hookability 33%
Nice presentation lures you into the game, which is soon uncovered as tedious and exhausting.

Lastability 26%
The action is irrevocably boring, and even the course designer can't change that.

A dull and unenjoyable game of joystick torture.