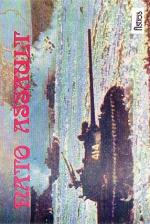 An essential game from Astros Productions for those busy people amongst you, scared away from wargaming by struggles of marathon proportions, simply to learn the game and win. Here (in this single player game), you are drawn into combat almost immediately, with defeat or victory less than an hour away - is this a chilling reflection on future war?

Despite the description in the clearly written manual, which sets the battle in the future, there is little in the battle plan and weaponry that differs from a tank encounter in the Second World War. As a concession to times to come, the trucks carry electronic equipment and a destructible landscape is dressed in strange colours. None of this detracts from the simple but none-the-less attractive objects of the game. The first scenario requires the player to escort trucks safely across bridges to the front line on the other side of the town, without being hit by Russian tanks. The second scenario is complementary and is a general battle phase without the trucks.

The computer's cunning is to be admired, and it will not hesitate to use surround tactics and hold forces in reserve. The human player will have to think hard to outwit the enemy. The Russian tanks always have the angle right when they fire, so you cannot afford to fluff your aim particularly at long range.

Cover can be found behind buildings and trees, unless destroyed. Vehicles move more slowly across rough ground Destroyed vehicles present an obstacle to both movement and fire. Each vehicle has a limited amount of action points for each turn - firing reduces these the most. Armour and ammunition is also limited.

The vehicles are clearly depicted, though the gun turrets are not always obvious and may cause the odd sensational retreat. Destroyed buildings look as though they have "crashed" and it would have been better if the turn counter had been clear numbers. By and large, graphics are good, right down to the caterpillar tracks. Instant data is shown on the screen at the right about each vehicle, changing after each turn, and there are good enlarged diagrams at the top. You are also told whether your shells have hit home or not though it is strange to find that a tank can be blown up even after a near miss is reported.

Scrolling is fast, as is the flashing from each unit to the next and sound effects are minimal, in keeping with the strategic nature of the game. The computer has a curious habit of continuing to move all its tanks, even after the last NATO tank has been destroyed. And the enemy tanks can be confused by too many obstacles around them and often do not all chase by the most efficient route, even when you are down to your last tank. However whoever wants a computer to be too predictable? It would be an advantage to be able to move from one scenario to the next without having to re-load the tape.

All in all, these are only minor matters and the game should quickly absorb all types - popular wargaming indeed!

Graphics are good... and the game should quickly absorb all types - popular wargaming indeed!