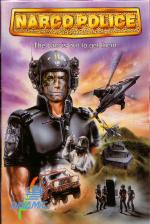 How come I get all the foreign games? First North & South last month, and now The Light Corridor and this! It must be my half-Italian good looks, or maybe the fact I can speak 36 languages (all at once). Ich bin ein Bauer, weil ich Gumm-istiefel habe. (That's German for "I am a farmer because I have a pair of wellington boots". Posh, eh?)

Anyway Narco Police. Mmm. Sounds a bit like NARC to me. Let's see. It's the year 2003 and a fifth of the world's population are drug addicts. This makes the drug dealers very, very rich indeed, not to mention very, very powerful. To remedy this situation each country has donated 2 of their top policemen to form a new narcotics squad - the Narco Police.

It's not many cops per capita, you've got to admit (in Britain it'd mean 12 million druggies with only 2 cops to deal with them!) but these boys are rock-'ard pros and no mistake. They know where they're going - a 'drugs factory' called the Narco Processing Centre on a island near Colombia - and they're going to kick a lot of bottom when they get there. So it's time to pack the Marmite and off we go!

On the surface, the island looks much like any other tropical paradise, but don't be deceived! Beneath the lush greenery is a network of high security tunnels which lead to the Central Processing Lab. Three units of Narco Police are flown onto the island and you are in constant communication with them via the Personal Intercom Unit. The aim of the game is to get at least one of your men to the lab, plant a bomb or 2 and then scarper as the whole caboodle goes up with a might bang, crash, wallop. You do this with a mixture of strategy tactics (switching control of units, launching missiles, sending in support troops etc) and shoot-'em-up skills (shooting all the 'orrible nasties who try to stop your men running through the tunnels).

This is sort of split-personality gameplay is reflected in the layout of the screen. On the right is your Personal Intercom Unit (this is where you work out the strategy bit) and on the left is the little chap you're controlling. He moves forwards, or sideways, and you follow him from behind (and he's dead impressive!).

And it's a right old palaver when you get down into the tunnels! You don't get faced with your usual baddies, ho no - these guys are circus extras, tumbling down from the roof and somersaulting at you the whole time! They take some zapping, I can tell you (though they do act to a set pattern).

Once you've finished with them you get to blow up a tank, then it's on to deactivating the terminals. Sounds easy written like that but it's a real maze down there with plenty of really mean (and I mean really, really mean) meanies to get through - and as you progress so they get more 'special'. Now, when something's called 'special' there's always a reason. 'What's he like?" "Oh, he's kinda special, he's got a portable rocket-launcher," Hmm. Then all you've got to do is find your way to the Central Processing Lab. Ha-ha.

Remember you've got 3 units, so you can try and move them all towards the lab bit by bit. Or you can try and do it with just one, and keep sending support troops when you run out of men

Narco Police, despite sounding a bit like NARC and having a similar scenario, is a bit of alright. I don't really go a bundle on shoot-'em-ups normally but I like this because of the strategy element, and it's that little bit extra that makes it that little bit special!

Dinamic have really done themselves proud with the Speccy version too (it's certainly better than the Amstrad!). Despite being in monochrome, the little sprites are crystal clear and there's no confusion over where you're going. When the little chap fires away with his gun he's sort of pushed back by the force of the shot, and when he moves he could almost be dancing - it's all really smooth.

In fact the whole thing looks absolutely spiffing, and it plays pretty well too. If shoot-'em-ups with brains are where you're at then this could just be right up your street.

A 'strategy' shoot-'em-up with good looks and brains too!

A 'strategy' shoot-'em-up with good looks and brains too!