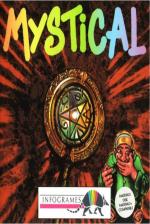 You clot! It seems you're a novice magician who's reached the end of his studies but is still daft enough to lose all the Great Wizard's scrolls and phials during a simple course on door-opening.

Not surprisingly, the Great Wizard is steaming. So he sends you off to find all those missing items, which have been strewn across parallel worlds populated with nasty gods who are jealous of the Great Wizard's Power.

Fortunately, the Great Wizard is not a bad old giffer, and will let you use the magic spells released by the items as you find them to defend yourself. This means that you can do all sorts of ghastly things to the enemy before they do equally nasty things to you. You can shoot them, destroy them with your aura, make them fall into holes in the ground, turn them to stone and generally ruin their day.

The action takes place over a vertically-scrolling landscape. You see yourself from behind as you plod up the screen, while the baddies move in from the top of the screen. You can move left, right, up and down, and either cast spells against the marauding monsters or simply try to walk round them. Collide with one and although you'll turn it into a pile of bones, it won't do your health any good. Once that gets below a certain level, you sink to your knees and expire gently. Take care, 'cos you've only got three lives...

The attacking monsters come in a bewildering range of shapes. There are cute little girls who nevertheless are trying to shoot you, priests lobbing bibles, horrible walking trees and various other mythical monsters. At first you're defenceless against these hordes, but, walk into a spell or scroll and after a moment your little character stops to either drink the potion or recite the scroll, whichever it is. Thereafter, the magic spell comes into operation, and stays working for a fixed time, after which you'd better find some more magic to help you out.

There's an extra twist here, though. If you press the space bar immediately after casting a potion/scroll, you don't use it but store it instead. You can collect up to ten in this way, and select the one you want to use now you're walking along.

There is also a two-player mode, where your companion takes charge of a golem at the start of the game. The golem can't pick up or use spells, but is very good at jumping up in the air and landing on the monsters, instantly turning them into a pile of bones...!

The graphics are excellent. The scrolling is smooth and the characters move nicely, but the best thing of all is the sheer humour that's built into their design.

Sound, too, is excellent. The various effects that accompany the spell-casting are perfect and add to the humorous treatment of the game.

The only worry is just how long the game is going to appeal for. The ability to collect and use the spells at will adds depth to the gameplay but also makes the game a little tricky to play - you will often be using the joystick or keyboard simultaneously (or trying to!) as the going gets progressively tougher.

And even with that extra depth, is that really enough to do? Although the game is humorous and very nicely done indeed, there really isn't a great deal to it. For sheer medium term entertainment value, then Mystical is magic.

Brilliant graphics and superb animation mean that the magical spells often have hilarious results. However, the game itself is very 'samey' all the way through, and the initial fun factor eventually gives way to tedium.

Sonics 90%
Great music and effects. The sound works really well with the graphics.

Grab Factor 84%
Very easy to get into, and the graphics hook you straight away.

Staying Power 56%
Great fun, but more of a novelty than a long-term thing.

Overall 79%
A great, great game - if only there had been a little more to it.

A great, great game - if only there had been a little more to it.