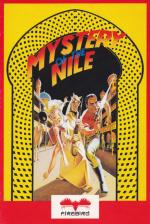 Firebird have been busy recently with Cholo and Mission Genocide last month and now Mystery Of The Nile. The Jewel of Luxor has been stolen and you control three heroic personalities in their "Indiana Jones-style" attempt to recover the gem which Abu-Sahl has stolen. The three characters are Dr. Nevada Smith (aren't Nevada and Indiana both states in the USA?), famous archaeologist, Janet Dwight his assistant and Al-Hasan, a native of Egypt.

The game opens with Janet standing on her balcony in the morning and down below appears one of Abu Sahl's men. On another balcony are a pile of hand grenades which Janet must use to kill her enemies. She then moves off the screen to the right where there are more minions to be slaughtered. This time there is also a dynamite thrower to kill. Screen three sees the entrance of Al-Hasan who follows Janet about and screen five brings Nevada into the game.

The three characters are controlled one at a time and and control is changed by use of the keys 1, 2 and 3. Janet throws grenades, Nevada shoots people and Al-Hasan beats people to death with his umbrella. The gun and grenades are in a limited quantity and replacements need to be picked up by the appropriate character. The heroes each can be hit four times before they die and if one of them is killed the game ends.

Sound in the game is limited to spot effects. There are a couple of tunes on the title screen and death screen. The tunes sound good, but don't fit in with the Arabian setting. The graphics are bright and colourful, making the game look appealing.

One thing that makes the game very difficult is the way in which the heroes that you aren't controlling move around. They often end up being killed by an enemy or by you if you are not careful where you aim. This spoils an otherwise good game by making it too difficult.

There you are trying to save something or other from somebody or other, when these two lunatics start weaving about the screen doing their level best to get you to put a grenade on their bonce. Personally I'm surprised Janet didn't give up on these bozos a long while back. There must be plenty of demand for a gorgeous, pouting, grenade throwing, homicidal maniac.

I quite enjoyed it really.

Clear view, and just as disobedient.

Grab Factor 73%
P. It has a good atmosphere.
N. A bit difficult to get the hang of.

The heroes that you aren't controlling move around at random and often end up being killed by an enemy (or by you if you are not careful where you aim). This spoils an otherwise good game.