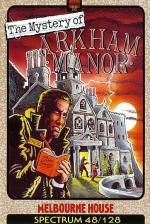 Melbourne House has come in for some stick from adventure fans of late, thanks to Lord Of The Rings and its faults, and Redhawk and Kwah! being less than successful in their attempts to bring the comic-book approach to adventuring. But at least it continues to try something different, and the two-part Mystery Of Arkham Manor is certainly that, and this time very successful in my view.

It's Monday June 23rd, 1924, and Arkham Manor is the home of Colonel Lemin, a figure well-known to readers of The London Chronicle, for which you are a leading freelance news reporter. The editor has received an alarming letter from the Colonel reporting strange events in the village, and you've been sent to find out exactly what's going on.

The game is so realistic, it's incredible the amount of detail that's been packed in, but here are some of the things that you have with you to help you solve the Mystery of Arkham Manor:

THE NOTEBOOK: The reporter's stand-by, though you really ought to save up and buy a new one as this has only got four pages left. On the other hand maybe you'll never need another as the ERASE command can be used again and again, and the PRINT command will enable you to send the pages to any printer that happens to be lying round. Don't forget to read the first page to remind you of something at the start of the game, and then jot down anything that you come across which you think might be relevant.

THE CAMERA: Then you've got a camera, with three even more magical re-usable photographic plates, and you can move a cursor round any screen to take a photo of anything on it, to incorporate these into the articles you're going to be writing for sending back to your paper in London.

TELEGRAMS: Need some info? Any self-respecting newspaper has a large library of reference books and cuttings files, and you can request information on people and places by sending telegrams. First you have to be in the telegram office, and secondly you'll need the money to pay for them.

STORIES: This brings up a blank page of the London Chronicle, and the options to place headlines, text or photos on the page.

You arrive at Arkham Station on Monday morning and your notebook reminds you that you've got an appointment with Colonel Lemin in Harrison Street. Movement is by using the cursor keys after selecting the MOVE option, though you can speed things up by pressing a cursor key as soon as your character arrives in a location - then he'll move straight on to the next. Arrows at the foot of the screen point to the available exits.

No-one should be surprised to know that when you get to Harrison Street, Lemin isn't there - unless I just missed him by dallying in the lounge bar exchanging pleasantries with the barman, who told me he needed some flour. Picking up the very convenient grain of corn, it didn't take me long to provide that for him, in return for which I got a wine bottle, though he wouldn't allow me into the guest room as that cost 1/- a night and I was skint. The prospect of finding 3/- to pay for a telegram was even more remote, so time to get down to work and file a story.

In addition to all this, there's a status window which shows your cash situation, the knowledge you've acquired, and your sanity, which is seriously affected by disturbing encounters with zombies in graveyards, but benefits from simple things like rest and sleep.

One drawback is obviously that the more you pack into a program, the more restricted the adventure-game elements are, and I'd guess that the game might not take too long to solve in comparison to your 'real' adventure, but the whole brilliant idea of the game will more than make up for that - desktop publishing meets the detective adventure mystery!

The whole brilliant idea of the game will more than make up for anything else - desktop publishing meets the detective adventure mystery!