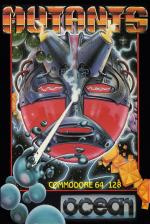 Now here's a funny thing. Denton Designs strike back with a strange and possibly innovative game. It's a shoot-'em-up with icons - and odd combination to say the least.

The game is set in the distant future, when man has colonised the remote star systems and matter can be manipulated with ease. Unfortunately man's political and moral development has remained stagnant since the second millenium and inter-stellar war has raged for the last 600 years.

You are a member of a thinly spread group of freedom fighters who are opposed to the weapons researched carried out by the Survivor Zero Corporation; have discovered that the weapons used by all sides in the way are supplied by the Corporation, and that they are currently experimenting with a new generation of weapons called Macro-Genetic Mutoids.

MGMs are the first large scale biological weapons capable of mutating into ever more virulent and robust species, hence the name Mutants - you must eliminate this deadly system.

You control the Rainbow Warrior, a single man patrol ship. Your task is to enter the fifteen deep-space test zones of the Survivor Zero Corporation and find the components of a self destruct mechanism.

Each test zone contains a different strain of mutants. You have four lives and no time limits to complete your task.

Each zone requires different techniques to master and some are more difficult than others.

Missiles are high-yield explosive devices that have an effect over a large area, but can only be fired one at a time.

Barriers are degradable defensive weapons that can be used to erect a temporary shield against the mutants. They have no effect on the ship. The supply of these devices is limited, so after ejecting the full load of ships weapon system automatically switches to photon torpedoes.

The last icon is a picture of the ship and selecting this icon switches to the Zone Map, 4 x 4 grid representing the sixteen zones of the research establishment. The top left zone is the control zone, the others are the test zones.

Mutants won't appeal to everyone - but I must admit I found myself quite taken with it, thanks to the weird things goin on in the zones.

However, I wouldn't rush out and buy it just for that - and I reckon the lastability factor could be a bit limited. Mutants is different and difficult to classify but if you are a fan of Denton games, and this is pretty typical of their style, combining strategy and quick thinking, it's well worth having a look in your local computer store.

Mutants is different and difficult to classify but if you are a fan of Denton games, and this is pretty typical of their style, combining strategy and quick thinking, it's well worth a look.