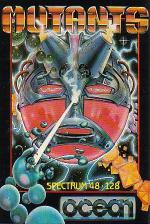 I've been out with some pretty weird types in my time but none so totally mutant as this collection of blobs, lines and what looks like animated dandruff. Throw in a handful of icons and what've you got? The newie from Denton Designs, that's what.

Or rather, that's not what because this is a conversion from the C64 and I have my suspicions that it lost out somewhere along the way. Either that or Denton has totally lost its once almighty touch.

It's a shoot 'em up combined with a minimum amount of strategy. Part one takes place a four by four grid where you try to collect fifteen parts of a self-destruct mechanism, which are reassembled in the sixteenth zone, at the top left hand corner.

Each of the zones is a sort of inter-stellar field, bounded by an electrified fence, but their content is far more deadly than cowpats. The mutant strains that inhabit the fields are lively little things, always running about (perhaps that's how they strained themselves) and making your life a misery.

There's only one type of weapon to deal with each strain - see. I said there was an element of strategy - and you can only kit up at the mother ship, between zones. If you don't get the right one I'd suggest you make like a parasite and flee.

The control zone takes the shape of a maze, and once again you have to be careful not to collide with its walls as you search for the re-assembly point. As it isn't free of nasties, which probably escaped from an ancient Pac-Man program, you'd do well to wait until you've collected enough bits to make the risk worthwhile.

An all-right sort of game, you might think. Well, it could be if not for the fact that it shows all the signs of a hasty conversion. Your ship's reactions are poor and its movement is sluggish. Collision detection appears to be erratic - particularly in the maze.

It also suffers from my least favourite game-feature ever - the instant death syndrome, which doesn't give you time to escape - and on the loss of your final life there's an immediate Game Over message with singular lack of finesse. Add to that the absence of music and all but the most primitive effects and there's little to make you want to continue playing.

In fact the game is so badly balanced that I didn't reach the second level, where you take on the mutant colony, and about which the instructions are strangely vague. It may be that this half is one of the all-time classic computer games... but unless the programmers mutated along the way, somehow I doubt it.

A disappointing mutation from the Commodore that lacks the speed and playability to make it addictive.

A disappointing mutation from the Commodore that lacks the speed and playability to make it addictive.