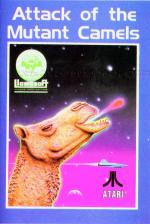 In this conversion from an original game for the Commodore 64, you have to save the earth from an invasion of giant camels.

We make no apologies for digging out this game. We haven't had any new Atari software in this office since September. Talk about the machine time forgot! Anyone got any new Atari stuff out there?

Some decidedly unfriendly aliens have perfected their genetic engineering to turn a normally friendly camel into a 90 foot high monster.

These beasts are shielded by neutronium and have in-built lasers as defence.

In control of your tiny fighter plane, you must fire at the beasts, weakening them until they can go on no longer.

Attack is a sideways-scrolling game, stretching over ten screens. At the top of the current screen, a small representation of the whole game is shown so that you can work out your position and the distance to the nearest camel.

The group is gradually marching towards the side of the screen and, if they make it, the planet Earth will have been destroyed and you are branded a failure. But score enough hits and the camels will be wiped out one by one.

If you've wished that your Atari could have the same games as your friend's C64, then now's the time to start catching up.