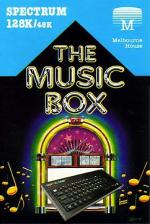 After the success of Wham, The Music Box, Mark Alexander has vastly improved the sound capabilities, taking full advantage of the sound chip on board the 128. The original version for the 48K machine uses the Beep command split by a routine to create a duophonic effect and has some options for adding percussive noise. Note entry is achieved via the bottom two rows of keys which, in combination with an octave key, gives you a range of about five octaves per voice.

Note values are limited to quavers only, but you can join them together to form longer notes rests are inserted from the ENTER key. As you enter notes on the second channel you automatically hear the first track along with it, which means that bum notes in a harmony are instantly recognised. Tempo is variable and editing is absurdly simply just advance through the tune step by step till you hear the offending note, select the channel and overwrite. There is also a looping facility for each channel so that sequences can be set up or repeats of the whole piece can be arranged.

So how does the 128 version improve on this? Plenty, is the answer. The opening turn for the screen display is 'Peter Gunn' in a cleverly designed arrangement that shows off the three channels of sound plus percussion. Each channel can be set to produce a different sound by some rather clever software that allows you to design your own sound envelope. Note entry and editing is very much the same as in the 48K version and the display shows you where you are in the piece as the notes scroll past a fixed point.

Each channel has a window display showing you which sound envelope number it is using complete with a graph of that envelope. It also registers the note number counted from the beginning of the piece. A larger window flashes up the special effects or commands you have specified as they occur during the piece. The effects, assignable to each channel individually, are as follows:

a) altering the envelope volume which will help you to get joined notes sound smoother, getting rid of the rather annoying pulse present in the 48K version.

b) altering the Individual levels of the channels so that a good sound balance is possible.

d) the ability to make any channel slide up and down in pitch. This can produce very spectacular effects.

The display has a volume meter like a VU meter on a hi-fi. A piano keyboard running across the bottom of the screen shows you where your notes are being played or entered, with a different colour used on the display for each channel. The colour of the screen border can be altered to suit.

From the main menu, apart from the usual load and save options, there are help pages and sections dedicated to defining the sound envelopes. The latter are noise free and produce some pretty good sounds. The envelope editing cleverly uses a set of bar graphs that shape the sound via the arrow keys, each alteration being plotted in an adjoining window. It comes with eight preset sound envelopes so that you are not completely at sea. When transferred to the main display each sound graph is reproduced in miniature in the channel window.

There are also nine preset drum noises that can be varied far more than on the 48K version: a wider choice of frequencies and volumes is available via the envelope editing procedure. Any percussion effect has to be put onto one of the three channels but you can switch from percussion to notes within each channel, and with careful planning the loss of one channel for an instant is not noticeable.

Your homespun masterpieces can be saved to RAM disc as well as cassette. Like the 48K version it has a compiler which produces a machine code routine which lets you put tunes into programs of your own creation.

The accompanying documentation and instructions are all fairly accurate, although the key reference guide needs amending for the 128. For example the 'step back one note ' command only worked when SYMBOL SHIFT was held down. CAPS LOCK and P independently allows you to step through the tune event by event (note by note as they occur). But it does list a 'get you started' tune for you to enter, as well as six pre-programmed tunes that put The Music Box through its paces very successfully, even if some of the tunes are a wee bit inaccurate.

If improvements are to be made, I would like to see some sort of advanced editing whereby defined sections of the tune could be filed away and re-ordered into a song format. Self-created envelopes could also be stored in this way to allow access to the sound parameters more quickly: an envelope file as it were.

If you were only going to buy one music program, then buy The Music Box for the 128. It's a definite winner, and will take a lot of beating.

If you were only going to buy one music program, then buy The Music Box for the 128. It's a definite winner, and will take a lot of beating.