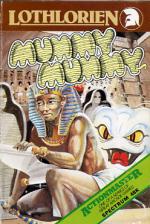 A trio of Egyptian Panic variants suitably swathed in rotting bandages and dunked in enbalming fluid. The first is fairly pointless to be honest, and merely involves digging a couple of holes in Tutanhjamun's tomb in the hope that a crusty Glob (animated and angry) can be tempted up from the lower levels and then brained.

It's little more than a ritual really, prior to entering the second levels 'n ladders screen, which is based on the standard Panic layout. Here you must collect at least five of the randomly scattered cartouches (a kind of hieroglyphic notepad) from beneath the noses of prowling Globs, thereby being allowed entry into the third screen, which puts you within sniffin' distance of your beloved endgame sarcophagus.

Pharaoh enough you might think! Unfortunately, despite the promising scenario, this variation on a theme has little to commend it. The graphics are functional (i.e. not quite naff) and the game just happens to be an expert on all things Egyptian and have stacks of interesting Egyptian holiday snaps to show. Y'know, Keaton at the Sphinx, Keaton impersonating a sphinx, that kind of thing. There's even some Super 8 film somewhere! Now, where did I put it all...?

Despite the promising scenario, there's little to commend this game. It's all fairly pointless very fast.