Published in Your Sinclair #67 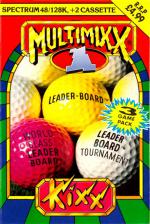 This is the first of a Multimix £4.99 series of three games from those people at Kixx. Except it isn't. Well, it is but just that in fact all it is is Leaderboard Part 3 - a compilation from ages ago which consisted of three original golf games (Leaderboard, World Class Leaderboard and Leaderboard Tournament), now as a compilation once again re-released for a fraction of the price (only in a slightly smaller box).

But, come to think of it, calling it a compilation may disillusion you slightly. Admittedly, there are three separate golf games, but the only real difference in them is the courses. "No less than twelve," boasts the cassette inlay and there's no disputing that, but it's just that the three games aren't actually ridiculously different from each other.

The good news about all this though is that all three Leaderboards are all three bits of corkers (even if they are ever so slightly dated). You play 'into' the screen, as shown in the screenshot over there, with, hello again, the screen (eventually) updating itself in between shots. All you have to do is select the appropriate club, take note of the wind and slope if necessary and, with careful fire-pressing to set the power and swing, off you go. Around 18 holes. For 12 courses (spread over the three games). Whether or not you'll get bored before you've finished is anybody's guess, although if you were playing as a multiplayer it does pump up the fun a bit. These are unquestionably "the best golf simulators of all time" so conclusively this must be "the ultimate golf compilation", although don't quote me on those last two points because, erm, I just copied them from the back of the instructions.

These are unquestionably the best golf simulators of all time so conclusively this must be the ultimate golf compilation.
Logout