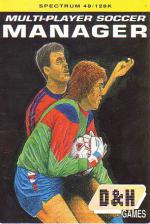 When I was a wee bairn I thought Football Manager was a classic. But you know how it is - you grow up, other things enter your life, and soon you've forgotten all about your first love and the cold winter nights you spent together trying to win the FA Cup (sniff).

Anyway co you can recapture that wonderful feeling with up to 3 of your friends and Multi Player Soccer Manager. Each of you takes control of a crappy Fourth Division side, your aim being to steer it to the top of the First, and win the League and FA Cups. As everyone knows, in real life this is incredibly easy, so let's have a look at how D&H have rendered it on the humble Speccy...

The first sensible thing is to select the 'team' option from the main menu. This allows you to train, pick and drop players, each of which has a skill rating. Then it's time to get on the bus and 'play game'. Instead of watching the match or anything interesting like that, all you see is the Divisional results, a bit like on Grandstand (boo), with all the matches played that week displayed on the screen. You can then look at the League tables, to see how we'll you've done.

As well as training, you can chuck out the crappest team members and put a bid in for some new players (who are still crap, but probably better than the ones you've just fired), and also decide how much you want to spend on your Coach, Physio and Scout

In fact there's a stonkingly huge amount of detail incorporated into Soccer Manager - you can improve your ground making it bigger or safer (a good idea if you're having crowd trouble), visit the bank, look at the fixtures list, or even (if you've had enough) resign. You'll protably spend so much time fiddling about with the tiny little details of your team (and waiting for any other people to do the same) that when it's time to play it'll be a bit of an anticlimax! But it really does seem as if your improvements lead to greater success on the field - so it isn't just a waste of time doing them.

MPSM is very easy to get th hang of because it runs from a child-proof main menu, and tends only to use single keypresses. Occasionally random event swing into action. You might get a load of dosh for having the game televised, or you might get half your team injured in some goalmouth unpleasantness. These occasional events are usually bad news, so can be a lot of fun if they happen to one of your mates!

Indeed the game itself is better when 2 or more people are playing. There is more of a competitive element, though it naturally takes longer (because everybody spends hours making tiny adjustments to their teams just to annoy the others!).

Yep, MPSM is one of the best soccer management sims in a quite a while (even though I only managed to reach the bottom of the Second Division!). It's the kind of thing most people would immediately think was crap but then if they played it they'd change their minds pretty sharpish. Give it go - you might be surprised.

A management game, but good fun nevertheless. Give it go - you might be surprised.