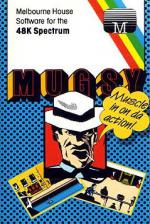 "Now listen up, I want big Louis from Detroit to pay Mugsy a visit. No - not Fingers. Big Louis himself. Dis time Mugsy has gone too far."

The gangsterspeak dialogue of Melbourne House's latest game - Mugsy - takes you back to the mean streets of Chicago where a guy had to be tough to survive.

Mugsy's graphics knock spots off anything that has so far been achieved on the Spectrum. For this reason, we have made it the first of a great new review feature where we show you several screens from a game.

When our reviewer first looked at Mugsy, he kept calling people into the room to look at the pictures - so stunning are the images.

Using comic strip speech bubbles, Mugsy is a strategy-cum-arcade game. The strategy element sets you up as a gangland leader who has to make decisions about how much to pay off the cops, how much ammunition and guns to provide for your loyal hoodlums and how many customers to squeeze in your protection racket.

The computer keeps a running total of your cash in the safe and the number of loyal hoodlums and customers. You can also buy and sell customers from the syndicate.

At the end of each go, when you have entered all your decisions, the computer gives you a progress report.

You have to be smart to do well at Mugsy. Make too much money and the big boys will start to see you as a threat; too little and they will soon send a hit man to rub you out. All this and you still have to contend with greedy cops and other hoods trying to muscle in on your patch.

The arcade element of the game appears when a hit man is despatched from Detroit. This is a shoot-out in a restaurant. Using the keys, you can move Mugsy around the screen in an attempt to out-gun your assassin.

Should the hit man do his job, you are given a percentage rating on your performance and, as usually happened in my case, some sort of scathing comment. It's not nice being called a schmuck by a Spectrum, I can tell you.

As well as putting the squeeze on Spectrum owners, Mugsy will also take the heat off Melbourne House now that they have announced that Sherlock Holmes will not be available until September.

Using a punchy, fast-moving dialogue and stunning graphics, Melbourne House have really created an atmosphere of Al Capone and the world of organised crime.

Personally, I would have preferred this excellent scenario to have been used as an Adventure. Having said that, Mugsy must still rate as Melbourne's best offering since The Hobbit and that's saying something!

Using a punchy, fast-moving dialogue and stunning graphics, Melbourne House have really created an atmosphere of Al Capone and the world of organised crime.