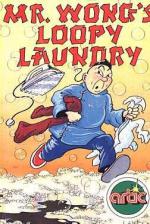 A rather wishy-washy game is this latest from Artic - the company that did for the articulated lorry what Esther Rantzen did for dental surgery. It's a climbing game - a mixture of Donkey Kong and Burgertime but based around washing and laundry.

You take the part of Mr. Wong and your job is to collect the various pieces of laundry which are scattered around the screen. You then have to return to the top of the screen and tip the garments into the chute.

There are about half a dozen items on screen one and this number increases on following screens. You have to collect the items one at a time. If you are carrying something, then you'll have to drop it into the chute before you can collect another. The only entrance to the chute is at the top of the screen which is quite annoying.

The Burgertime aspect is apparent in two places. Chasing you round the screen are an iron, a sack of laundry and a froth of soap suds. These may not be as tasty as sausages, tomatoes and chips but the way they move is very similar.

Your defence against these hazards is a box of starch. A box is good for five shakes and a quick shake in the right place will paralyse a pursuing enemy. When stocks of starch fall low, a new box will appear and you have a limited time in which to pick it up.

This is a good game. There's not much variety though, as the screens are all very similar. The only difference between screens one and two is a slightly different layout of the ladders and the introduction of an extra nasty.

Control is via a Kempston or Interface 2 joystick. Alternatively, you can use the keyboard. The keys are well laid out and easy to lay fingers on in a hurry.

As it says on the cassette inlay, it's all good clean fun.

A good game. There's not much variety though, as the screens are all very similar.