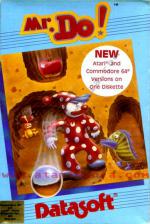 This highly original game, the arguable father of Boulderdash, was a very popular arcade hit during 1983. The original Universal game has been perfectly copied by Datasoft under official license.

Mr Do is a clown, although at the moment not a particularly jolly one. He's stuck in a surreal candy striped underworld and there are meanies trying to get him from everywhere, what a predicament! The only way of escaping is by either collecting every single cherry that's dotted about the screen, or by destroying all the pursuing monsters. Even then it's a case of 'out of the frying pan into the fire' and onto an even harder screen.

When you start the game you find yourself at the bottom of the screen, which has a few tunnels, apples, cherries (in groups of 2x4) and a door in the centre of the playing area. As the game commences, red creatures emerge from the door and give chase. It is your choice whether you start burrowing through the ground or charging through the tunnels.

There are two ways of finishing the screen. Firstly you can eat all the cherries, and the best method is to run over a group of them in one go. If you get eight cherries without stopping between any of them, then you'll get a 500-point bonus.

The other way is by killing all the ravening monsters. To do this you can use two methods. When you start you are given a magic powerball that may be fired at any time. This bounces up and down the passageway until it meets a nasty, which it destroys by exploding. The other technique is to drop one of the apples Boulderdash-style onto the pursuing denizens. Usually it is best to tunnel upwards under an apple and wait until there's more than two baddies coming up the tunnel. Move left or right and let the apple drop on their unsuspecting bonces.

As you progress through the screen, you sometimes get a creature that emerges from the top with a letter on its chest (E, X, T, R or A). Destroy this and the letter appears at the top of the screen. The other way to get these letter monsters is by waiting until all the red nasties have emerged. When they do then the door turns into an item of food. Get this and the red nasties freeze and a letter monster emerges to give birth to three more 'orrible blue meanies, which you give chase. You can squash these as usual, but only one at a time since the monster following the one that has just been squashed will eat the apple. If, on the other hand, you squash or blow up the letter monster, the blue ones will turn into apples and fall. This is quite useful - if you can catch the letter monster at the right time then you can squash most of the red nasties as well. Once the letter monster has been destroyed, then the red ones will unfreeze and chase you at an even faster rate.

If you manage to destroy the correct letter monsters and spell out EXTRA, then you'll automatically finish the screen, go to an amusing animated cartoon and be awarded a bonus life.

After every third screen you are rewarded with a cartoon-style screen where you are given a 'very good' message and told the time and scores for the three previous screens.

Although Mr Do was originally an upright screen game, Datasoft have done absolute wonders in converting this ace arcade game. It's been a long time coming but the wait has been worth it - here stands, surely, the best version of Mr Do on any micro. If you liked the original then you'll absolutely adore this. It's got all the features, tunes, cartoons and is as graphically identical as is possible (marred only by the fact that the presentation has to be in horizontal screen format). The game itself is immensely hookable and I found myself (and still do) going back to it again and again to push my score up just that little bit more. If you have a Mr Do machine near you, don't bother to play it any more ... go out and buy this brilliant conversion now and save yourself a bit of money.

The arcade game of the same name has been around for some time and was one I enjoyed playing frequently in its time. There have been a number of attempts at a Commodore version and although most were creditable, nove have quite captured the gameplay and thrills of the original. Now the official version has at last arrived and it's as close to the original as is possible, considering the original was on an upright screen. The only thing is, I didn't find myself enjoying the game as much as I used to, but then that's only to be expected since the game is sprouting a few grey hairs. Still, this is an excellent arcade conversion and it will definitely appeal to ardent fans of the original.

Graphics 78%
Identical to the arcade game.

Sound 69%
Quite a few tunes, identical to the original.

Hookability 86%
With 'free' credits you want to keep at it.

Lastability 68%
Screens get harder but are rather similar.

Value For Money 69%
If you still play Mr Do, a good investment.

Excellent conversion, but a bit dated. If you still play Mr. Do, a good investment.