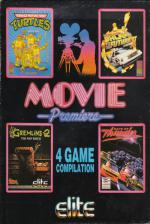 Lights, camera, action! For years Hollywood has been home to the stars. Now software companies everywhere are cashing in on movies licences which bring the stars to your Speccy screen. Mark "Barry Norman" Caswell grabs a bucketful of popcorn and settles down for an evening's entertainment with the latest film tie-in compilation..

Teenage Mutant Hero Turtles: Even though Guido, Speedy and Polly (commonly known as the Samurai Pizza Cats) are now more popular than the shelled amphibians, the turtles are here to save the day (with no sign of Mighty Mouse).

Huey, Ralph, George and Bert (these names'll do, we can't spell the real ones - no coincidence they're the noises you make when violently sick!), the pizza-munching heroes are on a mission to save poor old April O' Neil from a fate worse than an anchovy pizza nightmare.

Yep she's been abducted by the arch baddy himself, the infamous Shredder (Boo, hiss!). The chase is on through the sewers of New York to save the lovely April and Shredder's henchmen are lurking around to punch your lights out.

Gremlins 2: The New Batch sees the return of little Gizmo the Mogwai and his pal, Billy, as they try to stop the latest batch of Gremlins escaping from a high-rise building called Clamp Plaza.

Billy has until nightfall to destroy the little swines, but the task isn't easy. As he wanders around the game's many rooms, he's attacked by myriad hybrid Gremlins, the result of genetic experiments.

But he isn't helpless: Gremlins hate bright light so our Bill carries a torch to protect himself. Also, Gizmo turns up now and again in Rambo gear to lend a much needed hand (or paw).

There are five levels. Set in 2015, the first sees Marty on a futuristic skateboard trying to stop his son landing himself in jail. The second puts the player on the shoes of Jennifer (Marty's girlie), who's mistakenly taken by the police to her house of the future. From here she must escape before all and sundry can return to 1985, then head to the final stage in 1955.

Days Of Thunder: Based on the ultra boring Tom Cruise movie, you play Cole Trickle (Bloody stupid name!), an up-and-coming NASCAR racer who dreams of winning the Daytona 500.

There are six races to compete in, starting at Daytona and going through Phoenix, Atlanta, Talladega and Charlotte before returning to Daytona for the final. There are sixteen computer-controlled cars in each race so rev that engine and head for the finish line!

Movie Premiere is a mixture of excellence and old tosh. Gremlins 2 and Teenage Mutant Hero Turtles are both rip-roaring games whereas Back To The Future II and Days Of Thunder received slatings when first reviewed, so what's the point of re-releasing them?

Overall, Movie Premiere is a 50-50 split, two good and two crap games. Consider carefully before purchase. It's almost worth buying for the goodies.