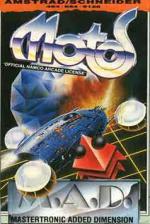 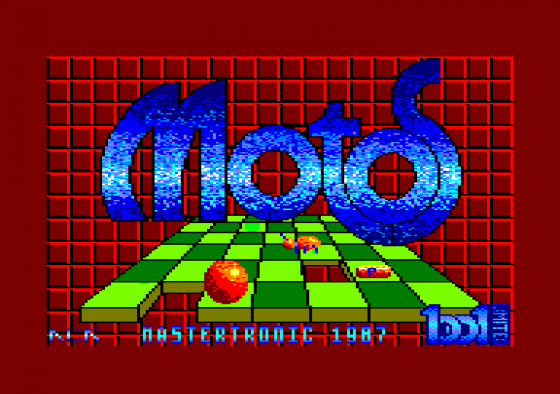 Arcade conversions are regulars on the home micro scene but on a budget label they are rare. Motos is one such conversion and is all about Space Bees and your attempts to defeat them.

You must defend the solar base from the attacks of the Space Bees and to do this you must simply push them off the solar base, so that they fall into the infinity of space. Unfortunately you can also be pushed over the edge. The bases are two dimensional and viewed from above. They are composed of coloured squares in differing arrangements for each of the 62 levels.

Each level is completed by pushing all the Bees off the base. When this is done, you progress to the next level. Another problem is that if you are on a level for too long then shooting stars appear and start destroying the squares on the base. They home in on you, so the only way lo stay alive is to keep moving. However the Bees can also fall prey to the stats if you're lucky. 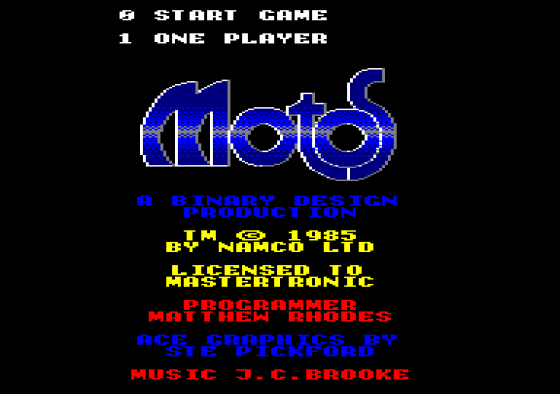 Sounds simple enough, but the Bees come in different strengths and if you don't have enough power then they can easily push you around. The first few levels have only the weaker Bees, but the tough guys appear soon after. To push off the tougher Bees, you need a more powerful engine. This is achieved by picking up power parts. At the start of each level, the power of your engine can be increased with up to seven power parts. Careful selection of engine power is needed since the power parts can only be used once.

Some screens have gaps which you can jump if you have Jump Parts. Jump parts are picked up in the same way that power parts are, but only one power of jump is needed. As well as clearing gaps this also enable you to destroy squares by jumping on them twice. This can be handy in despatching Bees, but be careful not to fall down your own holes.

On some screens there are Navicons which spit out lots of Bees and make progress more difficult. They can't be destroyed, you just have to kill Bees faster than it produces them. Beacons can be pushed off the base for bonus points. Don't get too greedy though; it always results in losing a life. Every ten levels you get an extra life. 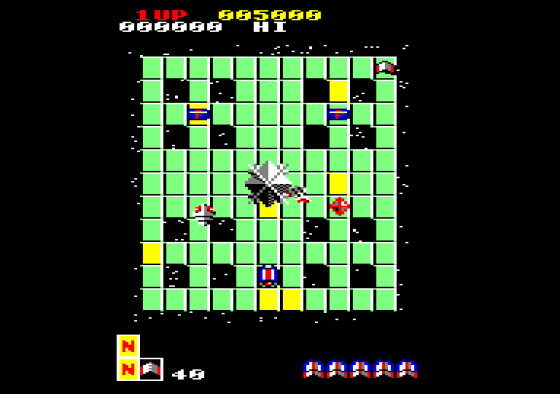 Even though the layout on the screen is simple, colour is used effectively. The sprites move about smoothly, but there is little animation. Music plays throughout the game and it does get tedious. An option to turn off the music, in favour of sound effects, would have been nice. There are only a few in-game effects which are for bumping into things, explosions and shooting stars.

Although the game is simple in design, it is fiendishly addictive and you'll be constantly having just one more go to get to the next level. Choosing the power of your engine adds strategy to the game. At a budget price you should not be without this game.

Simple ideas very often produce the best games, such is the case here. Bumping the bees is easy to start with, but as you have to start judging the strength to use and light against ever increasing odds, it gets very addictive. It will be a shame it the budget houses also start getting obsessed with arcade conversions, but if they keep up this standard it will be hard to argue with it.

Green Bees are no problem.

Overall 82%
P. Good arcade conversion, and at a budget price.

A good arcade conversion... Simple ideas very often produce the best games, and such is the case here. 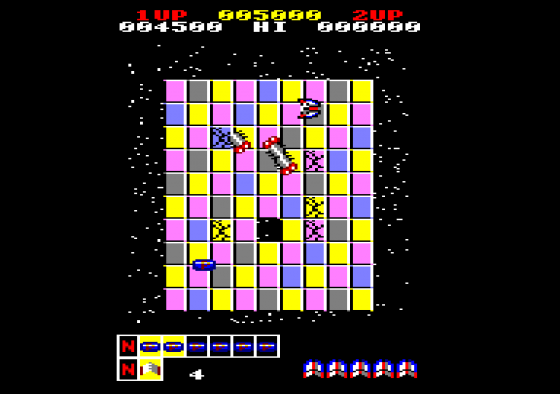