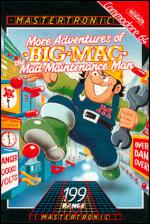 Mastertronic has once again come up with an incredibly addictive game at a very competitive price. It is well written and does not contain any obvious bugs.

The objective is to get Big Mac through 18 different vaults of a power station. In each vault he must turn off all the power switches before continuing on to the next screen. There are various traps set by the security system which may kill him if given the chance. Of course even if you avoid the traps he may still suffocate when the oxygen supply runs out.

The screens contain items such as force fields, conveyor belts, ropes, platforms, etc. There are quite a lot of animated displays and colourful graphics which make the game exciting and fun to play.

When you are not playing, the computer will display some introduction screens, hi-score table and go through the various levels. It also comes complete with its own annoying repetitive tune.

The idea behind Big Mac may not sound very original, which it isn't, but for the asking price it represents excellent value for money. The quality of the game is up to the same standards as other programs based on the same idea.

The instructions give you a brief for your mission and tell you the keys that may be used; a joystick is optional. Along with these there are some examples of the playing screens printed on the inlay card - they might even persuade you to buy the game.

There are quite a lot of animated displays and colourful graphics which make the game exciting and fun to play.