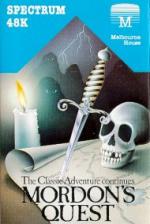 Once in a while, along comes an adventure which halts family life for a few weeks, the sort that demands attention night and day until all its secrets are unfolded, all its locations explored, and all its treasure safely stored!

Mordon's Quest is one of that rare breed. It is a game with so much text and so many locations that it is difficult to believe that it comes on tape.

The objective, which you are called upon to fulfill by Mordon himself, should you find him, is to retrieve the seven component parts of a machine designed to perpetuate reality, which was broken up by Bostafer in a greedy attempt to gain immortality. As well as finding parts of the machine, there are treasures to be collected en route as your reward.

The game commences in a fairly ordinary house with an unusual bathroom. There are a couple of locked doors that provide frustration, and since there seems to be little of interest other than a blanket and a newspaper, outside is where the action must be. Trouble is, the weather is rather inclement and the house is enveloped in all varieties of mist, fog, and mist mixed with fog.

The adventurer is well advised to take shelter again after thoroughly exploring the exterior, for then a chink of light may appear to help the player penetrate the swirling clouds!

Arriving coldfoot in the jungle, the way leads along a twisting, turning path. As the path narrows, the plot thickens like Daddy's Sauce (and you know who is his favourite) as two simultaneous problems prevent onward movement for the explorer.

This is the point where one family, at least, was all set to stay up for the night, until the errant son Neil arrived home from a school trip to the Commodity Exchange - and I think the commodity was lager!

"Solve the problem, Neil!" I commanded, wearing my all-powerful wizard's hat. And he did - just like that!

As well as having plenty of text, Mordon's Quest also has many of those deliciously funny and exciting surprises that make an adventure a pleasure to play, always interesting and never predictable.

After the brush with the little chef and his lethal cuisine, I was all set to relax for a while. But suddenly, "A muscular bronze skinned man wearing a loin cloth leaps from the trees and, holding a knife at your throat, says: "Hello ducks! You must be the new adventurer I've heard so much about."

He does on to demand that I guess who is the king of the jungle - three wronguns and it's heads he wins! "The lion!" I reply confidently. "Not in this jungle he isn't!" says Tarzan.

On and on through the jungle, and soon the adventure appears to close up at a dead end. But something quite revolutionary lies in wait, pointed to by an apparent flaw in directional logic.

Before long I was applying some pressure to the problem, and was soon enjoying a refreshing if dangerous swim, and exploring a complex of metallic corridors.

A nice feature is that the player is allowed six lives, so if killed through some foolhardy deed, the game can be continued from that point just as if it had been saved.

There are over 150 locations in this text only game, and all of them well described. Although not all are useful by way of being essential to the problems, they do contribute to a very realistic atmosphere, painting the picture far more effectively than any graphics could do. Oh happy purist!

The response is machine-code fast, and the vocabulary large. Over 400 words are claimed. Most commands can be of two words only, but some full sentences are possible too, although I have the feeling that the trailing words are stripped off and the sense derived from the first two.

This leads me to my only criticism - the replies, or some of them. If neither word of a command is recognised, then the computer will reply "Pardon?" If one word is recognised and the other is not, then the reply is "You can't".

Since this is also the reply to fully valid commands that are invalid actions in the game, it becomes a little confusing in trying to sort out whether it is the intended action that is not possible, or whether different vocabulary is required.

HELP always produces "Try drawing a map" and would best be removed altogether, for it is rarely want of a map that halts an adventurer's progress!

Mordon's Quest is an exciting and humorous adventure with a range of problems from the "think a bit" to the "head banger" variety.

It is from Melbourne House and available for the 48K Spectrum, Amstrad and Commodore 64, priced £6.95. A very reasonable price for an adventure of this quality. I have no hesitation in recommending it to hardened adventurers.

Oh, and by the way - if you still can't unlock that door south of the landing, don't worry! You may have better luck in Bostafer's Revenge, the sequel which is promised shortly, and which you're sure to want after playing this one!

A quality adventure and I have no hesitation in recommending it to hardened adventurers.