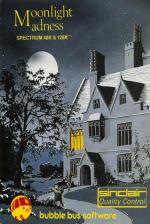 I always used to hate, loathe and utterly detest Bob-a-Job Week when I was a cub scout, and judging from the scenario of this latest Bubble Bus title, things haven't changed much over the last twenty years. Having wandered down a huge drive to an old mansion, you ring the bell whereupon your call is answered by an even older man. He explains that he is a mad professor and is somewhat surprised that you have got even this far, having managed to avoid his guards and booby traps. Such is his surprise that he promptly drops down with a heart attack although not before blurting out that his pills are locked in the safe and you will need sixteen keys to open it.

Honestly, the lengths some people will go to in order to avoid paying up but you nobly decide to do your good deed for the day and try and get the pills. The mansion consists of a series of doors, switches, platforms and monsters and your task is to wander round, collecting the keys and generally avoiding getting killed. If you are standing next to a door, pressing fire will move you through into the room behind. Stand next to a switch though and the fire activates the appropriate mechanism. Not all of these are beneficial so the temptation to go round pressing everything in sight must be avoided. Typical effects include building extra platforms, activating lifts and mobilising monsters. Getting to where you want to go often requires both timing and planning. One annoying feature is that certain doors lead to a row of eight doors with a large pair of eyes above. This is some sort of maze and it is possible to get out again, it just takes some patience. So frustrating is this element of the game that two people who tried the game thought it was a bug and reloaded the game (there is no way to abort your current game).

Other features are annoying too. You can redefine the keyboard but the pause and music on/off keys are not affected so I found that every time I tried to move right, I paused the game. This is just bad programming and something that should have been picked up in playtesting. The game looks and plays very much like Booty which is no great surprise as John Cain wrote them both. Like Booty, Moonlight Madness would be all right at budget price but is not very good value as it stands. Keeping to the boy scout theme, be prepared before you buy this one.

This would be an alright budget game but it's not very good value as it stands.