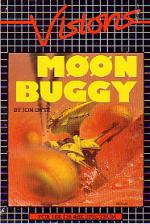 You are stranded (for some obscure reason) on an alien planet where aliens attack from above and the sides, and the ground is full of holes. Lunar Jetman had to get out to fill them in, but technology has obviously advanced and the makers of Moon Buggy have provided it with a sort of pogo stick underneath which bounces it 20 feet into the air to clear the potholes.

The guns fire straight ahead in the direction of travel as well as straight up. Up above, crowds of aliens jiggle and waft about, dropping bombs in a constant rain, while from either side various weapons cruise just above the planet's surface in your direction.

Should you get hit by an alien or bomb, or fall into a hole, the buggy doesn't explode, but does something more original - a wheel flies off! With each screen cleared, more and varied aliens appear. Also the position of the holes in the ground alters.

A good game with quite good graphics, especially the buggy and the aliens. The colour is very well used, with the ground changing colour on each screen. One problem with the instructions - it says LOAD"" when it should say LOAD"" CODE. Quite playable medium addictive.

The game has a good use of colour with smooth and very detailed graphics. It can become very frustrating when you are almost on the point of clearing a screen and something goes wrong. It is an original idea, but in the end it is lacking something in content.

Pity about the incorrect loading instructions. the game is very playable, with sensible control keys which are responsive. The moon buggy is well drawn and the variety and animation of the aliens is very good. The flying aliens have a knack of staying near the edge of the screen where you are under more threat from the ground huggers. Moon Buggy also boasts one of the best hi-score facilities I've ever seen. However, it fails to be completely addictive and remains a good, original sort of shoot-'em-up.

Fails to be completely addictive and remains a good, original sort of shoot-'em-up.