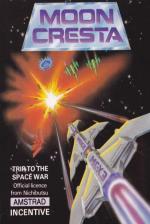 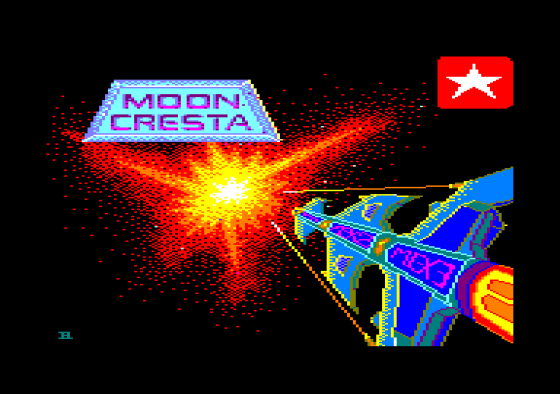 This is a conversion of a now ancient arcade game that inhabited pubs and leisure centres in the days of Space Invaders and Galaxians. Incentive obviously have a penchant for nostalgia but I'm sure many other people will enjoy what is a good old fashioned blast demanding great reactions and no brainwork.

There are nine basic waves in the game with a possible two intermediate stages, all of which repeat at a faster rate if you get through them once. The spaceship you control comes in three stages which form your three lives. The first stage has a single laser turret, the other two are larger and have two lasers. These are single shot, though, so that you can't get alien-murdering rapid fire.

The first two waves are circular objects that move down the screen in a figure-of-eight pattern. When shot, they produce a half circle which follows a similar movement pattern. Waves three and four are a particularly nasty breed of insect that make life very tough indeed at the start of the wave.

At the end of the fourth wave a bonus section appears. if you have two sections remaining, where they have to be docked together. This will earn you a bonus based on how fast you managed it and increase the firepower on subsequent waves. If all three sections remain you can dock them-together at a later stage to form the whole ship. After completing the nine waves this is broken up again leaving you to battle through in the same manner.

Waves five and six are aliens who whizz about the screen appearing intermittently for you to blast at. Wave seven has to be anticipated because two large fireballs come hammering diagonally into the middle of the screen catching the unprepared in a deadly sandwich. Waves eight and nine are equally devious with aliens who appear to dodge harmlessly about at the top of the screen but suddenly dive straight down the screen hoping to impale a luckless player.

The graphics are nicely done with a superb title screen, although the collision detection does leave a little to be desired. Sound is minimal but then what do you expect from an arcade conversion except "peoww-peoww-peoww" and the odd ditty? The most annoying features are the interludes that slow the whole game down and the fact that you can't reset it quickly to start again. A nice nostalgic blast but probably won't interest you for too long.

Yes, I enjoyed this as far as it went. A good blast is very therapeutic in the middle of a hard day. It won't ask much of your brain cells, but that can be considered an advantage.

Bright, colourful and challenging at first. But the excitement soon palls, leaving you with just another old-fashioned shoot-'em-up.

It's pretty murky without the colours, and pretty hard to even make out your ship!

A nice nostalgic blast but probably won't interest you for too long. 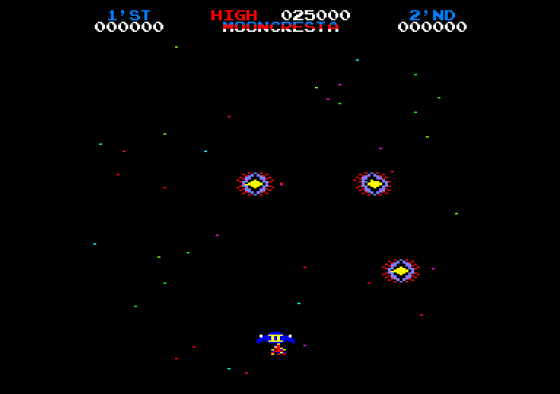