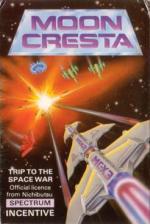 If you like the arcade game you'll love this Spectrum version. Incentive have bought the rights and has produced a version as close to the original as possible in the Spectrum.

For those not familiar with Moon Cresta, the game involves blasting successive sheets of aliens that are trying to destroy you. However, the aliens don't just sit there and let you shoot them, they rush around the screen in circular patterns and will also dodge bullets if they can. Once a certain number of sheets have been exterminated the player gets a chance to dock his section of ship with the next section. If he is successful, the new ship has increased fire power. This can be done twice at which stage the ship fires five bullets at once!

Naturally, the aliens also get faster, dodge more and even split into two when hit.

The program is well done with very fast action and impressive graphics. It has a colourful loading screen that is replaced by a menu that has 'Icons' rather like those used on expensive business machines. The menu gives the player the choice of keyboard control or any of the major joystick interfaces.

The program is well done with very fast action and impressive graphics.