﻿ Monty On The Run (Kixx) Review | Your Sinclair - Everygamegoing

Published in Your Sinclair #48 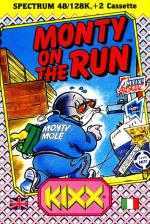 Another splendid old game, this time a true platform-and-ladders arcade adventure with loads of pixel-perfect joystick control and general frustration and hair-tearing. Monty has escaped from jail, only to find that on the outside there are loads more platforms and ladders to be negotiated. To get through the trillions of well designed and often fiendishly hard screens, Monty needs to choose five items (from a large selection) for his "Freedom Kit", and anyone who keeps their old copies of YS should find a list of the right things to choose somewhere in an old Clinic (it's a regular request). Both the graphics and gameplay are streets ahead of the Jet Set Willy blueprint, upon which most of these games were originally based, and perhaps Monty's greatest challenge is to get past the coal crushers - white and grey whatnots that cruch anything between them. Trouble is, unlike everything else in the game, they're completely random, and it can be impossible to avoid being splatted. Some bits too require an awful lot of thought - on balance I'd say it's harder than Wanted: Monty Mole or Auf Wiedersehen Monty. And now here it is for £2.99. Worra bargain!

Some bits require an awful lot of thought. On balance I'd say it's harder than Wanted: Monty Mole or Auf Wiedersehen Monty.