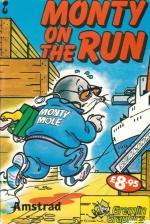 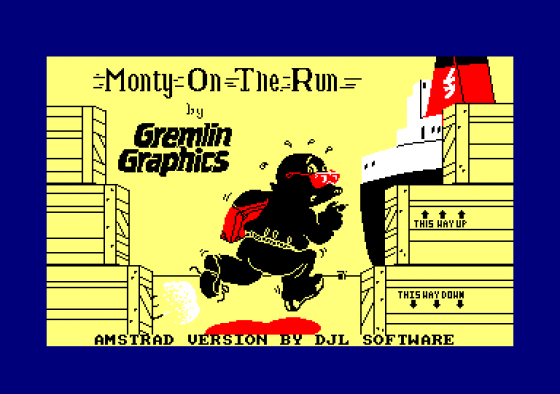 Monty is a mole and a naughty mole at that because he's just escaped from prison. His task is to make it to freedom through 49 platform screens using a kit comprised of five objects. Aside from negotiating the hazardous platforms the kit is his main problem because he doesn't know which five objects he needs.

As platform games go this is quite a tough one because it doesn't just demand good timing and accurate jumping but some exploration skills as well to find the right route. The screens of platforms and hazards connect up in several different ways and there are even red herrings thrown in to trap you. Most can be reached by walking off the edge of one screen onto another but some have to be jumped up to or fallen into.

The platforms come in several varieties but are mostly reliable and don't spring surprises on you in the form of conveyor belts or disappearing floors. However there are some dangerous things that can cause Monty's downfall so that the rule "if it moves avoid it" should be adhered to. 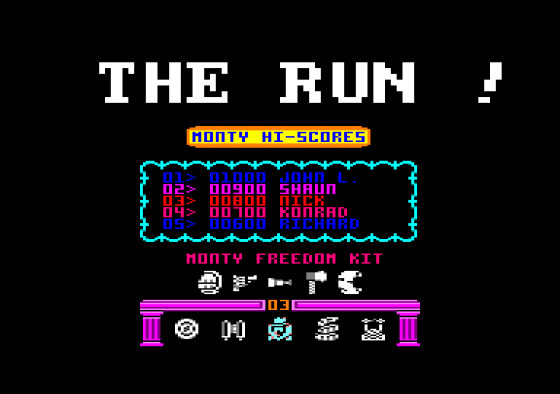 Monty gets over gaps in the floor, level changes and obstacles by jumping. This he performs in acrobatic style, somersaulting rather nicely in mid air, which isn't easy for a tubby little mole. Fortunately he can also get away with mistakes while doing this because he can fall any distance without coming to harm as long as he doesn't run into any nasties.

The nasties are the usual silly things that crop up in platform games. They follow planned routes either horizontally or vertically and have to be avoided by careful timing and quick reactions. Collision with one of them loses Monty one of his five lives. Another nasty feature are the crushers that, if they catch Monty, cause him to explode in four directions in lovely style.

Progress through the game is mostly achieved by trial and error in many repeated games. As you explore, gold coins and other objects are found. The coins just boost the score while other objects may have good or bad effects on the hapless mole. 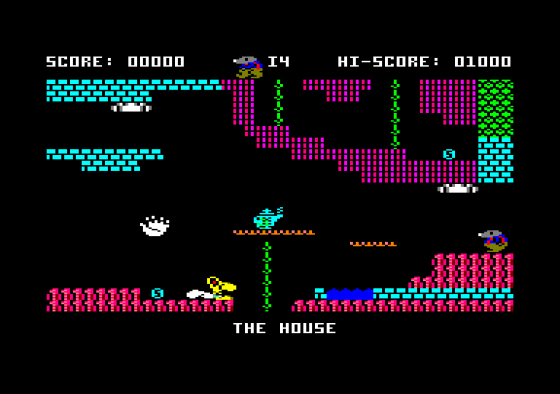 One of the major features of the game is the music that plays continuously throughout the action and the various title screens. There are different tunes for each section and all are very well done indeed and will get your feet tapping.

The gameplay isn't very original despite the introduction of the freedom kit but fans of platform games should enjoy it. The graphics too aren't that wonderful but have nice touches like the somersaulting and crushers. The music is the game's real hallmark, the problem is trying to sit still while you're playing it.

Cute graphics and great music don't make up for desperately tired gameplay. For size, complexity and playability, it's distinctly inferior to Jet Set Willy, and JSW is old. I really liked Monty's jumping action, but the game belongs in a museum.

N. Distinctly unoriginal in concept.
N. Gameplay is based on trial and error

The water is almost invisible, but that's all part of the fun. In fact, it's all of the fun.

The gameplay isn't very original... but fans of platform games should enjoy it. 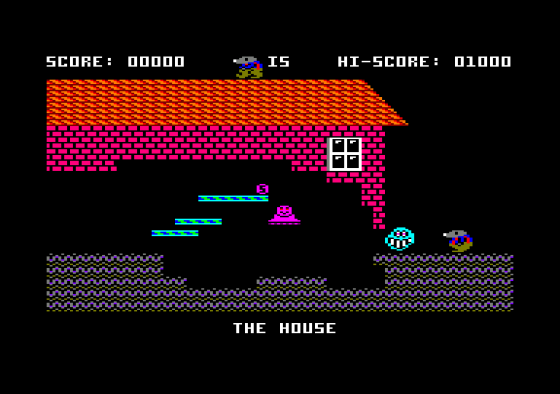